An Overview of the Concept of Deceptive Similarity in Trademarks 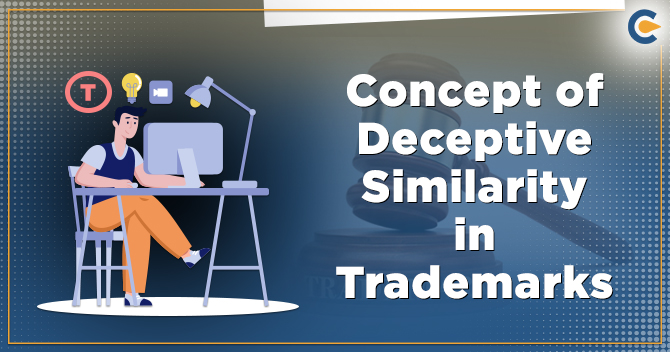 A “Deceptively similar” trademark is a concept which can be understood as the trademark created, almost similar or a look-alike of an already in existence trademark in order to deceive and create confuse among the customers. This concept of deceptive similarity has been discussed in The Trade Marks Act, 1999. According to Section 2(h) of the Act a trademark must deemed to be deceptively similar to another trademark if it is nearly resembles with the other mark as likely to deceive or cause any confusion in the mind of others.

However, the Trademark Act does not ascertain any particular criteria which can decide the ambit and scope of this phrase “deceptive similarity,” In order to remove the gap, it is necessary to note a judicial stand on the cases regarding the said matter. For this, the Indian Judicial Courts have dealt with various cases providing with landmark judgments and guidelines in the matters of deceptive similarity.

Read our article:Understand briefly about Timeline for Trademark Registration Process in India

The doctrine of deceptive similarity is widely used in the Judicial Courts as the matters of Trademark Infringement. Trademark plays a vital importance in a business and its goodwill of high need for protecting the trademark from being misused and infringed. Judiciary has taken an interest in the matters of Intellectual Property Rights and its principles. The judiciary has also looked into the matter after the problems has aroused regarding the deceptive similarity.

The guidelines have been provided by the judicial decisions in order to make adjudication of cases of trademark infringement much smoother. It is evident from the cases as some discussed below that the courts are going beyond the literal meanings of the legislations to provide justice and safeguarding the rights of the traders and protecting the interests of the customers as well.

In this matter, the plaintiff was a seller of cosmetic products under the trademark name “Lakme” and the defendant was also selling the similar products under the brand name of “LikeMe”. The case of trademark infringement was filed by the plaintiff. The High Court held that the names have not been in a category of deceptive similarity. These both are two separate marks with difference in the spelling and its appearance.

In this matter, the plaintiff has started a business of selling wafers and chips under the trademark name “PIKNIK”. Later on the defendant has also started business of chocolates under the brand name of “PICNIC”. A suit was filed alleging trademark infringement has been done. The Court held that the trademarks have not been in a category of deceptive similarity as they are different in appearance and has different composition of words.

In this matter the Hon’ble Supreme Court has held certain guidelines for an adjudication of matters related to deceptive similarity in trademarks. In this particular matter, the parties of the case were the successors of a Cadila group. The dispute has arisen on an issue of selling of the medicine by a defendant under the name “Falcitab” which was very similar to the name of the medicine that has been manufactured by the plaintiff also under the name “Falcigo”.

Both these drugs were used to cure the same disease. Therefore, the contention was raised that the defendant’s brand name is creating the confusion among the customers. The injunction was pleaded by a plaintiff. As in defence, the defendant has claimed that the prefix “Falci” has been derived from a name of the disease that is Falcipharam malaria.

The court has observed that because of a diversified population in the country an infrastructure of the medical profession is not so wide, so there can be probabilities of medical negligence. However, it is important that confusion of trademarks must be strictly prevented in case of pharmaceuticals and drugs. Therefore, the Court held that while naming the medical products, one must take more precaution and care. The names of the brand, therefore, being phonetically similar and will amount to deceptively similar.

In this matter, the plaintiff claimed that the defendant’s trademark “Fauji” has defective deceptive similarity as the plaintiff’s has “Officer’s Choice”. The claim has been made on the ground of similarity of an idea in making of the trademarks as a word “Fauji” which means a military officer in Hindi translation.

However, both the parties are in the business of alcoholic beverages. Further, packaging of both the bottles was also same. The trade dress plays a significant role in deciding the cases of trademark infringement. In this matter, the court has held that there is no deceptive similarity between the trademarks “Officer’s Choice” and “Fauji”. Therefore the trademark infringement suit case was dismissed.

Trademarks play a vital role in making a brand name popular and goodwill of any business. Not only it does help in creating the brand value but also it aids in generating the revenue. Being such important, the trademark is vulnerable to getting infringed or misused. One such way of trademark is making “deceptively similar” trademarks. Hence avoid deceptive similarity and register your trademark with an unique name. We at Corpbiz will help you in Trademark registration following simple steps and serve you the best.

Read our article:Can Trademark Registration Impact Your Business? Let’s Figure it Out!

Is it possible to do Trademark...

Trademark registration is an essential step towards brand building and its security. Sometimes the application for...

How to Deal with Raised Tradem...

The response to a trademark objection in examination report can be submitted by the trademark applicant. It can be...