Concept and Calculation of BOCW Cess 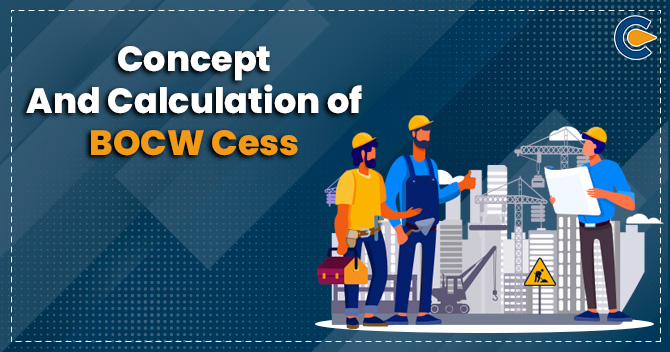 What Is The Slab Rate For BOCW Cess Under The BOCW Act?

The current rate at which cess is applicable ranges from 1-2%.

What Factors Need To Be Considered For Cess Estimation?

Cost of the project, i.e. cost incurred by the employer for constructing the building.

Note: Employer is not required to take cost of land and any compensation paid to worker into account for the cess calculation.

When Employer Should Pay Out The BOCW Cess?

Provisions around the Cess Assessment

Every employer is liable to file Form 1 under the Cess Rules with the AO within 30 days of the commencement of the project of payment of cess. Upon receiving the said Form, the AO shall initiate the vetting process of the same.

Post successful vetting, the AO makes the assessment order enclosing the cess amount payable and shares the same with the followings;

The employer is liable to reply to the assessment order within the prescribed timeframe to avert any chances of re-estimation.

Where an AO has passed an assessment order, and the employer opts to withdraw from or shut down the project or alter the project’s plan, thereby reducing the cost of a project undertaken, he may seek revision of the AO by filing Form II with the Assessing Officer.

Penalties for Late or Non-Filing of BOCW Cess

In such a case, the AO may slap a penalty equivalent to the estimated cess amount. A reasonable opportunity shall be given to the defaulter by the Accessing officer to put their case upfront.

Information to be provided by the employer in the Form- 1

Points To Summarize Regarding BOCW Cess

BOCW Act enforces stringent penalties for evasions or late filing of BOCW cess. The land cost and wages paid to the workers are not taken into account for estimating the cess amount. The net project cost is the only basis of cess estimation.

BOCW, i.e. Building and other Construction Worker Act, is labor-friendly legislation that seeks to protect construc...

How to Obtain BOCW Certificate...

BOCW Act was enacted to pay undivided attention to workers serving the construction sector. It seeks to protect the...