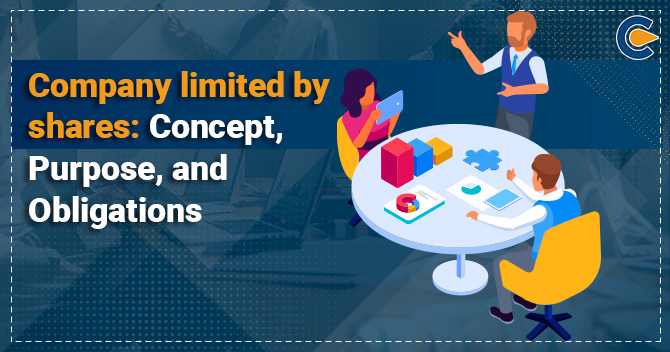 A company limited by shares is an entity whose shares are available to the public domain. They can issue shares to the general public. Such entities are also known as Public limited companies in India. In the United States, such companies are being referred to as ‘Inc’. One can find shares of such entities listed on the stock exchange.

Company Limited by Shares: The Concept

As per Section 2(22) of the Companies Act, 2013[1], such companies refer to an entity that has the members’ liability limited by such an amount that is unpaid on their respective shareholding amount.

The company can address this liability while the entity is running or as it is on the brink of closure. The term “limited by shares” refers to the shareholders’ liability to the business’s creditors for the fund that was invested originally.

As per the Companies Act, 2013, if the company members’ liability is limited by a sum not paid on shares they hold. This type of structure is known as a company limited by shares.

The shareholders must discharge the company’s debts only to the extent that is unpaid on their shares, and no tangible asset can be utilized to fulfil the debt. Such a company shall divide the share capital into fixed shares amount that can then be provided to shareholders. Such allocation of shares allows them to become the company owners.

A company limited by shares has ample funding options, including loans, equity, and grants.

A company limited by shares is broadly categorized into two major types:

Key Facts around the Company Limited by Shares

What is the nominal value of shares?

In simple terminology, the Nominal value of a share refers to the share that stays around a specific value assigned by the company during the issuance of a share. One can understand it as a minimum or exact valuation of a share. Simply put, the nominal value is an overall worth of a single share that an investor has to pay during its purchase.

It is worth noting that the valuation of such shares remains static regardless of the market dynamics. However, the same cannot be said in the event of a stock split.

The paid-up share capital in the above expression denotes the money that has been paid in exchange for the company’s shares.

For the sake of transparency, a company limited by shares should make relevant disclosures relating to material events in their filing before concerned shareholders and the stock exchange. Also, the listing is not a mandate on all exchanges. But, a company might opt to list to facilitate liquidity to its shareholders and improved access to the capital market.

Read our Article:Annual Compliance of a Public Limited Company: Rules and Procedures

Advantage and Disadvantage of...

Public Company registration is playing a vital role in the economy of India, which results in the generation of emp...

Public Limited Company is registered according to the rules prescribed under the Companies Act 2013 of India. Publi...