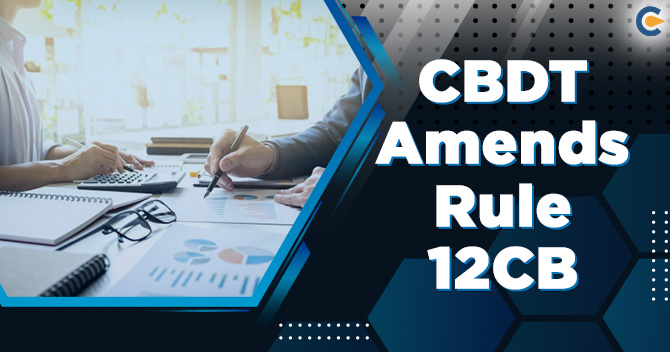 CBDT amends Rule 12CB, in the exercise of the powers conferred under Section 115 UB, sub-section (7), read with section 295 of the Income Tax Act, 1961 stating that the statement is giving details of the nature of an income paid or credited during the previous year. And other relevant details by an investment fund to its unit-holder and Principal Commissioner or the Commissioner of Income-tax as required.

In Appendix-II- Details in Form No. 64C and 64D shall be furnished

Form No. 64C– Statement of income distributed by an investment fund to be provided to the unit-holder under section 115UB of the Income-tax Act

Form No. 64D-Statement of income paid or credited by an investment fund to be furnished under section 115UB of the Income-tax Act

CBDT notifies Authority under Section 138 to furnish information to CCI

In pursuance of the sub-clause (ii) of clause (a) of sub-section (1) of section 138 of the Income-tax Act, 1961[1], the Central Government specified that the Income Tax Department has to share information with the Director-General/Secretary, of Competition Commission of India. It is further clarified that income-tax authority, must-

CBDT has notified two important notifications as one regarding substitution of Rule 12CB under section 115UB sub-section 7 with respect to an investment fund. It is regarding the statement of how income is distributed or paid or credited by an investment fund under the Income Tax Act. The same details must be furnished in Form 64(C) and Form 64(D).

The second CBDT amendment is about the information required to be furnished under sub-section (1) of section-138 to the Competition Commission of India. The information has to relevant and precise and must be confidential as conveyed by the authority.

Read our article:CBDT extended the Filing of ITR deadline till 30th September

The bill related to the Indian Institutes of Information Technology IIIT Laws Amendment Bill, 2020 has been introdu...

The (CBIC) Central Board of Indirect Taxes and Customs has pronounced the Faceless Assessment for all import goods...