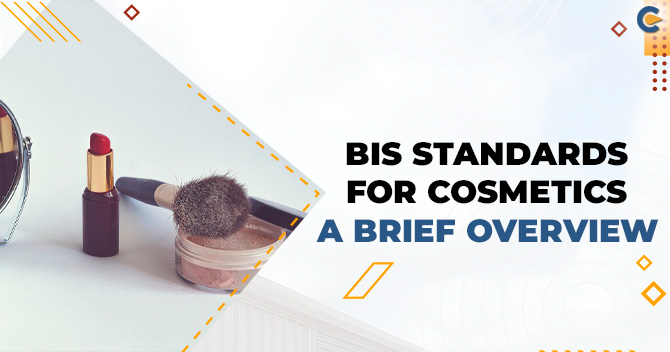 The cosmetics market in India still lacks comprehensive fencing from the regulatory authorities. Presently, it is witnessing an annual growth rate (aka AGR) of 20%. This growth is two folds when contrasted with European and American markets. The Central Drugs Standard Control Organization administers the safety and quality of the cosmetics items, broadly recognized as CDSCO. This write-up intends to pens down certain critical information related to the BIS standards for cosmetics.

A General Overview on the BIS standards for cosmetics

In the purview of the Drugs & Cosmetics Act 1940 & Rules 1945, Cosmetic refers to items aimed to be rubbed, sprinkled, poured, or introduced into, or sprayed onto the human body or any part thereof for beautifying, cleansing, enhancing looks, or modifying the appearance, & consist of any article aimed for use as a component of cosmetic.

The cosmetics items that comes under the ambit of Schedule S of the BIS standards for cosmetics:

All the aforementioned cosmetics items should stay in line with the updated BIS’s norms.  Bureau of Indian Standard has facilitated certain specifications for lipstick & skin creams in the Indian Standards (IS) 9875:1990 & 6608:2004.

As per the Indian Standard 6608:2004, there is no need to test the finished cosmetic good for heavy metals & arsenic if it has been tested in the pre-production stage.

There should be a declaration for Hexachlorophene & heavy metal for the registration of cosmetics items.

The test report including the result of heavy metals, including arsenic, lead, mercury and if the microbiological test. Undertaking from the cosmetic manufacturers declaring compliance of all pigments/raw material used, Hexachlorophene contents, & heavy metals (with prescribed limits) in items with BIS & Drugs and Cosmetic Rules, 1945.

Standards related to the Colouring Agent present in Cosmetics

Rule 134 of Drugs and Cosmetics Rules impose a prohibition on the use of cosmetic items containing colours, dyes, & pigments other than those cited by the BIS (IS 4707 Part 1 as amended) as well as Schedule Q.

The manufacturing, as well as the import of Cosmetic items containing mercury compounds, are prohibited under Rule 145 D and 135 A.

How to get registered under BIS?

To avail of BIS certification, the businesses dealing with cosmetic manufacturing must have the required infrastructure in place and the prescribed process control and testing capabilities for the products as per the Indian Standard. The cosmetic items shall also stay in line with norms underpinned in the ISS.

BIS underpins the norms for the cosmetic items which come under Schedule S of the Drugs & Cosmetic Rules, 1945. Items under Schedule S shall adhere to the Indian Standards norms incorporated from time to time by BIS, including toothpaste, Heena powder, skin powders, and so on.

What are the BIS norms for the use of Dyes and Pigments in cosmetics?

For skin creams & lipstick, if dyes colour is used, they shall stay in line with IS 4707 (Part I). The other ingredients should be used in the purview of the provisions of IS 4707 (Part 2).

What is the service tenure of a BIS certification?

BIS registration under Scheme-I serves a validity period of two years. The validity period would remain in effect only for items listed in the license. To extend the license validity, the applicant needs to fill a prescribed application form, and a standard fee and documents under the prevailing license must be submitted. License tenure may be stretched up to 5 years from the last date of validity of the license.

This is not an exhaustive list, so feel free to refer the concerned standard for more information.

In the purview of the health and safety of the general masses, the BIS have underpinned a long list of the norms that compels the cosmetic industry to use the aforementioned ingredients in the permissible limit. BIS standards for cosmetics are quite exhaustive and cover hundreds of critical substances that are prominently used in the cosmetics items.

Read our article:BIS Certification for Footwear Manufacturers: How to obtain it?

An Overview of BIS for LED Lig...

BIS stands for Bureau of Indian Standards, a National Standard Body of India constituted under the BIS Act 2016. It...

An Overview of BIS for Amplifi...