What are the various benefits of registration of Producer Company in India? 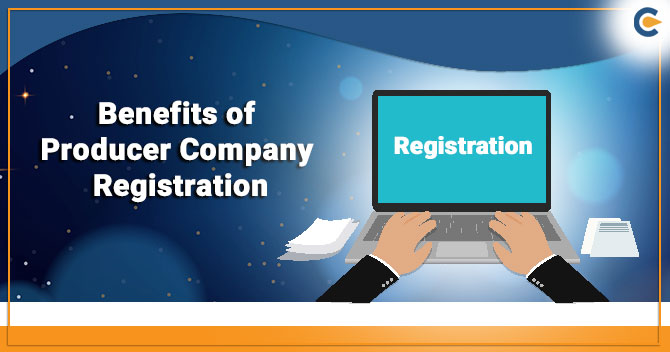 The Indian economy is an agricultural centric economy. Around 66% of the population is dependent on the agricultural activities for their livelihood. But, the essential makers, primary producers and farmers have had a long battle in India due to low benefit costs. The Government of India, has set up the expert committee in order to address these problems, the committee was led by Y.K. Alagh (an economist) to work into this matter. They initiated with the Producer companies concept, to the Indian economy in the year 2002. The main purpose was to help primary producers gain the access to credit, market, input, production technology, etc. In this article, we will further know about the producer company in details and the benefits of producer company registration.

What is a Producer Company?

A producer company can be described as a legally authorized body of the farmers or the agriculturists with the intention to improve their living standards, and to ensure them a fine status with respect to the available support, profitability and income.

Under Companies Act, the formation of a Producer Company can be done by ten individuals or more and 2 institutions (or more) or by the combination of both ten individuals and 2 institutions and both having the same objective of their business and deal as one of the following given categories of the primary produce Members or import of the goods or services for their benefit:-

What are the Authorized Activities of Producer Companies?

It is obligatory for the benefits of producer company to deal with the produce of its members and it is allowed to carry on any of the given below activities:

What are the Benefits of Producer Company?

The benefits of Producer Company are given below:-

The benefits of Producer Company come from that it is an organization i.e. it is a legitimate and a juristic entity developed under the Act. Therefore, a producer association has an extensive legally recognized limit and can declare property and in addition obtain obligations. The individuals or the directors of a producer entity have no obligation to the producer organization’s lenders as it is a separate legal entity.

If the companies are registered as farmer-producer companies then 100% deduction is applicable to those companies with an annual turnover of Rs. 100 crore and companies earning profit out from the same will not have to pay any tax. The Government of India has extended the advantages of Producer Company to 100% deduction to farmer as the farmers are the biggest pillars of our economy and reason behind its growth

It is very imperative of the government to support these members of the producer companies with the finances as they are the initial producers and they will need funding from time to time. Hence, the Government has inaugurated NABARD bank is for the benefits of Producer Company for farmers’.

The objective of the bank is to offer loans to the farmers for a time period not extending beyond six months to meet their needs of the producer companies.

A producer entity has an ‘unending succession’ that can be continuously proceeded with until it is lawfully broken down. A producer organization, being a separate lawful entity is not affected by the takeoffs or demise of any part.

It is the responsibility of the Government for considering and keeping the interest of the members of the producer organization for the success of the organization.

The Organization can also give data to the producers to authorize them to grasp their produce till the market cost become huge. All of these intercessions will lead to increase in salary to the essential producers.

A producer Organization is a huge platform for the primary farmers to obtain improved facilities. Thus, these members working in the benefits of Producer Company can effortlessly access government services like MNREGA, Pension, loan, PDS, and Scholarship.

Read our article:Producer Company Registration – Know the Documents Required and the Incorporation Procedure

On the recommendation of Y.K. Alagh, an expert committee led by noted economists set up producer companies in 2002...

Farmer Bill, 2020 left most of the farmers in a perplexing situation. Although the bill seems to be quite remarkabl...