Which is more Beneficial – Trademark owned by Promoter Or Company? Let’s Understand! 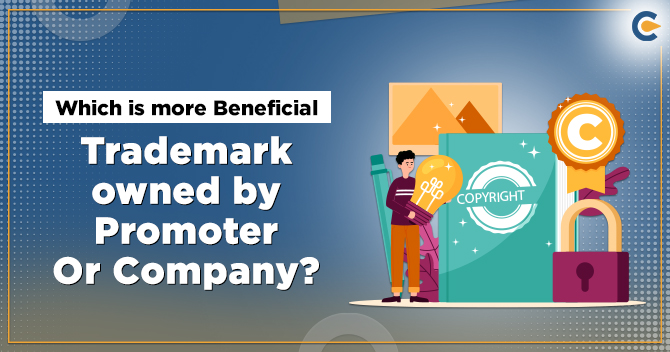 Also, one has to keep in mind that an application made to register the brand name, therefore the same name can be approved by the MCA without any hurdle for a Proposed Private Limited Company. Thus, one can count this as the major advantage of getting the Company Trademark Registration.

Importance of Trademark owned by Promoter

Promoters get assured by trademark registration, as no other person can make an unauthorised usage of the brand name. Once the trademark is applied for a Company, it can start putting up for ™ or ® symbol which is an indicative signal of ownership for all the competitors as well as customers who wants to approach an entity. Further, the company already incorporated can receive the Trademark in its own name on the basis of the Goodwill[1] earned and will also get the protection against an infringement.

Read our article:How to Identify the Jurisdiction of Trademark Registration in India

Which is more beneficial as Trademark owned by Promoter OR Company?

If an ownership rights are held by the person other than a LLP or company, in whose name goods or services covered under respective class of trademark is dealt, the third party will not be able to present any documental proof in own name. It has been presented in the company’s name and not in the name of promoters or other parties. Hence, all the goodwill built during a stage of application and can be claimed by the company only.

The Trademark is the valuable property for the person or entity putting efforts to build the brand name. Prime concern for filing a trademark registration application is name of applicant in whose name the ownership will lie of the proposed trademark. The question of ownership rights does not arise when the person is a sole party interested to build the goodwill in the brand name. However, the combined efforts of group of persons may have an issue regarding the ownership and pecuniary benefit out of a trademark.

A Company or Limited Liability Partnership enjoys a separate existence from its owners and hence it will also hold assets in its own name without interference of rights by the owners or promoters. The promoters hold highest beneficial interest for building the brand of company or LLP concerned.

Three Main benefits as Trademark assigned by a Promoter to Company

Factors to be considered to Claim Ownership

The owner of a trademark will held responsible for any matter related to trade name, trademark registration procedure or other allied matter. When one claims for an ownership, the risk of a property also passes with it. Feel free to connect with our experts at Corpbiz. They help you and suggest you all the ways and formalities related issues faced during the Trademark registration.

Read our article:Can Trademark Registration Impact Your Business? Let’s Figure it Out!

How to Register Trademarks for...

Trademark is a unique symbol or word that is used to specify any business and its goods. Once registered, the same...

What is meant by Trademark own...

The Trademark gets registered under the Trademark Act, 1999, after checking the availability of the unique name. On...