Lets Understand the Abuse of Patent Right with respect to Drugs 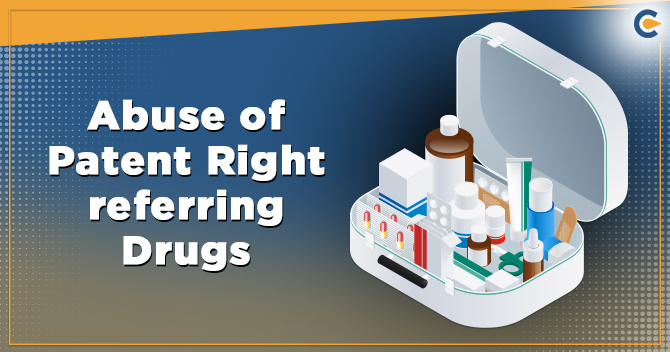 Patent right is not an absolute monopoly right with respect to manufacturing of drugs. It is a confined right and is subject to specific approved limitations. The Patent Act balances the individual right of patentee & interest of common public. The main purpose of Patent Act is to encourage the development of technology as well as innovation.

The Patent Act offers protection to an inventor for their invention providing them with exclusive right and protection from infringement or any illegal use of that invention by any other person. The government grants the exclusive rights to the Patentee after Patent Registration.

What are the Rights of Patentees According to Patent Act?

Section 48 of the Patent Act[1] talks about the rights granted to the patentee. The section confers the patentee with the exclusive right to prevent any third parties from creating, using, selling the product in India in case of product patent.

Likewise, in case of process patent, the patentee has exclusive right to prevent any third parties from using the process for sale of any patented product acquired directly by that process. Section 47 provides specific conditions where exclusive rights of patentee are restricted by specific acts:

It is to be noted that there are other specified act which does not amount to infringement of the patent right.

When Patent Rights are not getting Infringed?

Section 49 offers that patent rights are not get infringed when used on overseas vessels temporarily or accidentally. The use of the creation on vessel or aircraft listed in a foreign country or a land vehicle owned by a person who is a resident of other country who comes to India temporarily or accidentally, will not infringe the Patentee rights.

Patent Provisions for the Interest of General Public

Various countries allow manufacturing of generic drugs that utilizes the patented inventions for development of those generic Drugs. The details are required to be submitted under the law.

The generic Drugs producers can market their adaptation as soon as the patent of the original drug expires. This provision is known as “Bolar-like provision” or “regulatory exception is provided under Patent Act under Section 107A (a).

Section 107A provides certain provisions that state the conditions not to be considered as infringement of patent.

Government makes sure that no patent is exploited commercially in India and is available in the marketplace for general public. Government ensures that there is no exploitation of patent rights. Patents are granted for the reason to encourage inventions that can improve the industrial development and has to be worked in its full extent within India.

Section 83 of the Patent Act clearly states that the Patents are granted to encourage creation and to secure that the creations is worked in India on profitable scale. It intends to see that the patent right is not exploited by the patentee or any person obtaining the title of patent. Patents are granted to take the advantages of the patented invention available at affordable prices to the general public. Granted patent does not prohibit Central Government in taking actions to protect the public health.

For this purpose, government authorizes every patentee to submit a statement regarding operation of the invention for every year.

Statement Regarding Working of Patent

Every patentee and their assignee are required to submit a statement annually by the government to show the level in which the patented invention has been commercially utilized in India. If the statement is not submitted within 3 months of the end of each year then the patentee is accountable for a penalty. Non-submission of such info yearly can lead to the grant of compulsory license on the patented invention.

The details required to be submitted related to the use of invention is to show whether the discovery has been commercially exploited or not. If it is not utilized then the reason behind its non utilization and the steps taken for its utilization are required to be submitted. If it is utilized then the information related to the capacity and worth of the patented product manufactured in India and imported from other countries are to be furnished.

Compulsory licenses are accessible as a remedy against abuse of patent rights in India. The uses of Compulsory License are as follows-

However, in the occurrence of National Emergency or any intense urgency or public non-commercial utilization including public health crisis such as any epidemics to avoid any delay in the process provisions under Section 87 will not be applicable. The compulsory license can be approved immediately under Section 92 (3) with certain terms and conditions that the products manufactured under the patent should be available to the public at the lowest and affordable prices.

A patent owner has the right to decide who can use the patented invention for the period for which the invention is safeguarded. After obtaining Drug License with respect to Drug Patents, the protection of generic drugs is given to the patent owner. In other terms, patent protection states that the invention cannot be commercially made, utilized distributed, imported or put on sale by others without consent of owner of the patent. By doing the above mentioned you violate the Patent Right of the owner. Contact our professionals at Corpbiz for the ease of filing of Patent Application.

Read our article: Abolishing of Drug Patents: A Boon or a Ban?

Patent of Addition in India: A...

The Patents Act, 1970, is broadly based on the Report of the Ayyangar Committee passed in the year 1959. The Report...

Revocation of Patent in India:...

With the signing of the TRIPS agreement in 2005, the Indian Patent Act, 1970 was amended. The amendment was made in...