What are the Types of Share Capital? – Detailed Overview 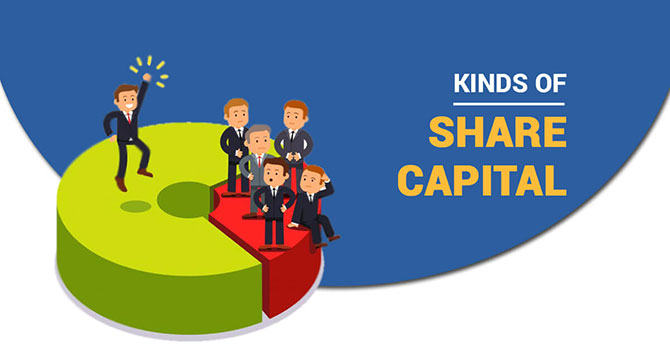 Share Capital is defined as the funds raised by the company through issuing shares to the public. In simple words, you can say that share capital is the money invested in a company by the shareholders. It is a long term source of finance through which shareholders gain a share of ownership in the company. Here in this article, we will have a look at the different kinds of Share Capital.

Which Act States the Nature of Shares or Debentures?

Section 44 of the Companies Act, 2013[1] states that the Share or debentures or other interest of any member in a company shall be a movable property and transferable in the manner as prescribed in the Articles of the company.

Authorized Share Capital is the total Capital that a company accepts from its investors by issuing shares which are mentioned in the official document of the company. It is also called as Registered Capital or Nominal Capital because with this Capital a company is registered.

NOTE: Once the Share has been issued and purchased by investors, these shares are called Shares Outstanding. This issuing of shares gives the shareholders ownership in the corporation. The Unsubscribed Share Capital can be called as the Treasury Shares.

Read our article:What is Article Of Association and Alteration in AOA?

What is the difference between Capital Reserves and Reserve Capital?

Why do Companies issue Shares to the Public?

Company issue shares to the public in order to raise capital or to finance their business operations, expand the business, and meet other financial needs. After the acceptance of shares by the company, the applicant becomes shareholders in the company, and they get the voting right on the matters of the corporate policy.

Startup companies and young corporations issue shares to external investors to raise money for expansion. Equity does not require repayment; hence, stress on the company is reduced. Also, the company issue shares in order to retire existing debts.

Early-stage companies require funding for various kinds of reasons, either for infrastructure costs, rent, security deposits, insurance, marketing, business travel, equipment, and furniture. This can be achieved by issuing shares to the public.

Why do Investors buy Shares from the Company?

You must have heard from many that shares are the best long term investments for an individual. But at the same time, it involves risk too.

Investors buying shares in companies generate wealth for themselves in the form of return on their investment. Return on these investments comes from dividend distributions that increase the share value.

In general, the share capital can be seen in the balance sheet of the company under the ‘shareholder’s fund’ heading. The paid-up capital is regarded as the real capital as it signifies the amount as paid by the shareholders. In addition, it is also added to the balance sheets liabilities side to complete the column.

Companies issue shares in order to raise funds by diluting the ownership interest of the original shareholders. The share prices may go high and low at some time. So it’s better to invest in the share market in a wise way. Also, many people get confused between shares and shares capital.  Share capital is the fund raised by a company through the sale of equity to investors, whereas Share is the proportion of the amount paid by the shareholder in the company.

Read our article:Provisions for the Allotment of Securities by a Company

Transfer and Transmission of S...

The Shares of an individual inside a company are transferable which facilitates the company in acquiring permanent...

A dividend refers to a return provided to the shareholders by the company against the profit generated in a particu...