Provisions for the Allotment of Securities by a Company 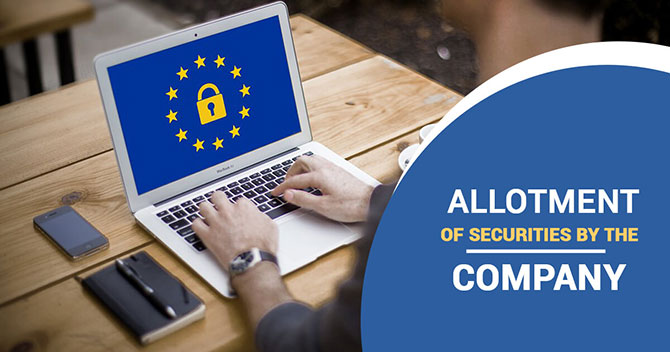 For the sake of expanding the Business or to pay off the debt, Companies may need to issue shares of stock to the public. Company issue different types of shares such as preference shares, ordinary shares, etc. Share issued at the time of incorporation of the company is called fresh Issue while after incorporation issuance of share is called Private Issue. Here in this article, we will see the procedure of how companies allot securities to their shareholders.

What are the provisions of the Company Act relating to the Issue and Allotment of Shares?

There are specific laws that need to be followed for issuing the shares of the company. But it restricts to the Private Limited Companies. Private Limited companies cannot issue any prospectus inviting the general public to subscribe towards its share capital. But the public companies can issue the shares of their company to the public, which is to be followed in accordance with the Companies Act.

The three basic steps of the procedure of issuing the shares are:

The first step towards raising money for a company is done by issuing the shares. A Prospectus is an invitation to the public for the purchase of shares in the company. The company has to submit a copy of the prospectus to the SEBI whereas the private companies do not need to issue any prospectus. The prospectus of a company gives the information about the issuing company – names of Directors, terms of issue, opening and closing date of the share issue, application fees, bank details for deposit and minimum shares for application.

The decision of the allotment of shares is taken by the company. Allotment of shares to its shareholders is called Acceptance and is not possible until subscription. Minimum Subscription is the minimum amount stated in the prospectus that is required to run the Business. It is unlikely that all the applicants will receive the allotment letter. Some applicants receive regret letters and their application money is returned to them.

After Allotment of shares by the company, the shareholders have to pay the remaining amount due on shares according to the procedures mentioned in the prospectus.

After the Acceptance of shares, the applicants become shareholders in the company.

Under Rule 13- A commission can be paid by the company to any person in relation with the subscription or procuring subscription to its securities, which is subject to the following conditions whether absolute or conditional:

Procedure for the Allotment of Shares after Company Incorporation

Procedure for the Privately Placed Shares

What is the Restriction on the Allotment of Securities by the Public Listed Company?

According to Section 69(1) of the Companies Act, no allotment can be made by the company until the minimum Subscription has been received.

In accordance with Section 69(3), the amount payable on each share should not be less than 5 per cent of the Nominal Value of the shares.

According to Section 69(4), the Money received from the applicants must be deposited in Schedule Banks until the certificate of commencement of Business has been obtained.

According to section 69(5), if the minimum Subscription has not been raised or the Allotment cannot be made within 120 days from the date of publication of the prospectus, the Director has to return the money received from the applicant.

According to Section 72, no allotment can be made until the beginning of the 5th day after the publication of the prospectus or any time later as mentioned in the prospectus.

If any person gives public notice of withdrawal of the consent to the issue of the prospectus, any applicant can revoke this application.

Read our article:Growth of Alternative Investment Funds (AIF) in an Indian Perspective

Legality Associated with the D...

The Dividend is basically a profit that is paid to the Company's shareholders. It is often paid annually to the sha...

The share transfer is an important characteristic of any registered company. Shares or debentures are movable prope...