All you need to know about the 45th GST Council Meeting 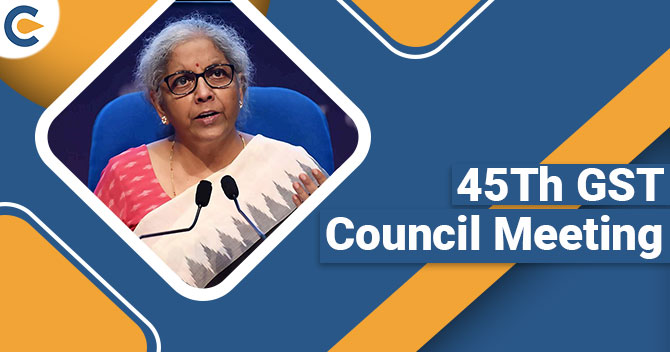 The 45th GST Council Meeting was conducted on September 17, 2021, and was presided over by Honourable Finance Minister Smt. Nirmala Sitharaman. The aforementioned meeting was held at Lucknow, U.P. The meeting was participated by MOS Shri Pankaj Chaudhri, as well as Finance Ministers from the states and UTs, as well as senior officers from the Union Government and the states. It is also worth noting that it was the first face-to-face meet in the previous 2 years. Let’s take a look at the results of the 45th GST Council Meeting, which was held on September 17, 2021.

GST to be paid by Zomato and Swiggy

Service taxes will be levied on E-commerce Operators

E-Commerce businesses will be required to pay tax on the key services performed via them from January 1, 2022, as discussed in the 45th GST Council Meeting:-

The GST regime will not apply to petroleum and diesel

Other Significant Aspects of the 45th GST Council Meeting

A presentation was presented to the Council on the compensation scenario, in which it was stated that the funds collected from the Compensation Cess in the period beyond June 2022 to April 2026 would be used to repay borrowings and debt servicing undertaken to bridge the gap in 2020-21 and 2021-22. Numerous possibilities, as proposed by various committees/forums, were given in this respect.

The Council debated the subject for quite some time. The Council resolved to establish a GOM (Group of Ministers) to look into the problem of correcting inverted duty structures for footwear and textile industry anomalies, which would begin on January 1, 2022; rationalise the rates and evaluate exemptions from GST from the standpoint of revenue augmentation. This was also decided to form a Group of Ministers to discuss ways to use technology to enhance compliance, such as monitoring via enhanced e-way bill systems, e-invoices, and FASTag data, as well as strengthening the institutional framework for intelligence sharing and coordinated enforcement actions between the Centre and the States.

*The rate adjustments and exemptions listed above are applicable as of the CBIC notification.

Hopefully, this blog was useful. View the PDF of the 45th GST Council Meeting Recommendations for further insights.

Everything you Need to Know ab...

Income tax audit report is an examination for an individual’s or organisation’s tax returns by agencies to veri...