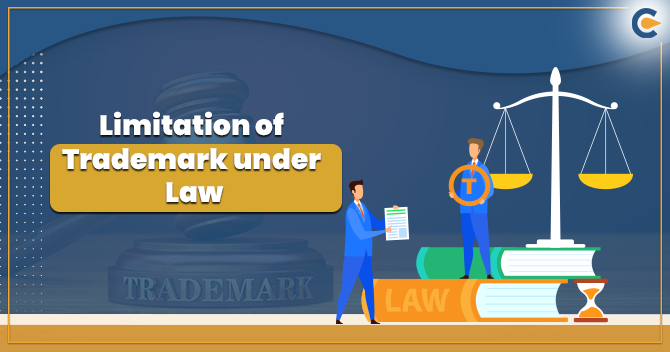 Trademark enrollment is the most persuasive way to protect a brand from trademark infringement. However, registration usually comes with a fixed trademark limitation. Trademarks only provide protection in the country in which they are registered. The concept of territorial law is fundamental to trademark law. Therefore, having national registration does not provide protection and rights to anyone in other countries.

For example, if your brand is incorporated in India, it does not mean that no other person in England can register the same brand name for similar service & goods outside the India. You can allege protection in England only if you have a registered mark in England. Furthermore, receiving a grant in one country does not confirm that it will get registration in other countries.

What are the Trademark Limitations?

The below-listed are trademark limitation provided under trademark law.

An individual can protect only certain things with trademark registration. Any factor that increases usability or functionality usually does not get security. If someone sells a product under a particular packaging or a specific size that is just to make it different then it is possible for him to take advantage of the trademark. However, this registration is not possible if such a shape or packing increases the usefulness of the product. This standard assists in managing a healthy competition among the competitors.

The trademark is territorial. Geographical boundaries play a very vital role in deciding in which countries the trademark will be valid. When mark registration is done in India, the enforcement of trademark rights is valid only within Indian Territory[1]. If one needs protection in more than one country, a separate international application is necessary in that country.

The main differences between Geographical Indication and Trademark are as follows:-

3. Doctrine of Fair Use Limitation

Many trademarks have multiple commonly used terms under trademark law, so the owner cannot claim exclusive rights to such terms if his trademark is used in a different context.

For instance, Trademarks used in the non-commercial use of trademarks in comparative advertising, parody and academic articles, media reports, etc., therefore, are not permitted to claim exclusive rights to the trademark if a third party uses your trademark in accordance with the fair use doctrine Does. For example, in the case of the trademark “Super Nirma” – the owner cannot stop anyone from using the word super in his trademark.

If someone else buys your goods in the European Union, imports them into the US, and then remodels them for less money, you probably can’t use trademark law to fight it. However, if the goods are being imported from a country where the goods are not trademarked, the trademark owner can stop this illegal import of the goods.

Will Use of Parody Amount to Trademark Limitation or Not?

Parody is used as a defense under trademark infringement suits. It is used to modify brand names, movie titles, etc. to create memes, satirical one-liners, etc. Now the question arises the parody use will amount to trademark limitation or not, this issue was addressed in the case of Tata versus Green peace by which the primary issue was raised before the court i.e. violation under the trademark Act.

In this case, the accused was portrayed as the turtles to avoid the Tata logo. Tata filed a petition for defamation, trademark infringement, and sought damages. Greenpeace filed a counter reply by using the parody defense. The court found that Greenpeace was not liable on the below-discussed conditions:-

Trademark registration is important for brands and companies as it helps to promote business bring recognition and add value to the company. It goes beyond the normal trademark limitation by protecting a brand from unauthorized use of the trademark. However, there are some limitations to its protection. Consulting a professional can assist you understand if their brand falls under such a range. A legal professional can guide and take some steps to build a strong brand. Kindly associate with the Corpbiz expert to know more about the trademark limitation mentioned under the trademark law.

Read our article: Understanding on Powers and Functions of the Registrar of Trademark

A Trademark is a symbol or word(s) which is capable of distinguishing the goods and services of one entity from the...

Trademark is a unique identity of a products or service or business, expressed by graphical representation, color c...