Relevancy of International Copyright in India 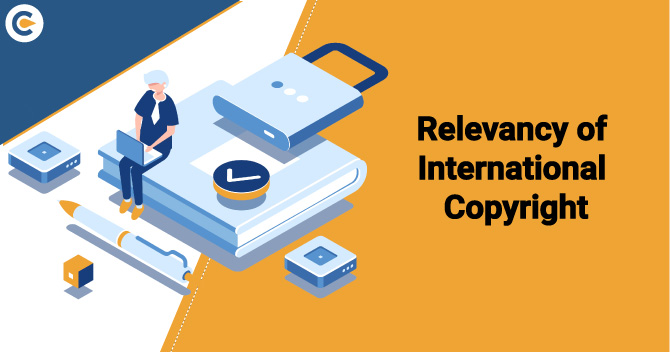 After post-independence, the Copyright Act 1957 was the first copyright legislation in India. However, this legislation has been amended six times since 1957. The recent amendment was in the year 2012, through the Copyright (Amendment) Act 2012. India is a member of most prestigious international copyright conventions governing the area of copyright law, including the following:

Copyright is provided to creative works of foreign nationals, whose countries are members of Berne Convention to which India is a signatory, are protected against any infringement of their creative works in India through the International Copyright Order, 1999. In India, courts have also been pro-active for the protection of copyright of foreign authors and owners, including books, art, painting, music, films, software, and database, etc.

What is Foreign Work?

The term ‘foreign work’ is not explicitly defined under the Copyright Act of 1957. However, for determining “foreign work,” it can be reasoned that any work which does not fall under the category as “Indian Work” under Section 2 (l) of the Act will be classified as “foreign work.” To protect Indian works in foreign countries, India has become a member of the international conventions on copyright and neighboring (related) rights, that are as follows:

“International copyright” is something that will protect an author’s writings throughout the world. The protection is given against unauthorized use in a particular country, depending on the country’s national laws. However, many countries offer protection to foreign works under certain conditions, which have been greatly simplified by international copyright treaties and conventions. In 1999, the International Copyright Order was formulated to protect the authors/owners of the foreign copyright works and enforce protections beyond the national limits.

Under Indian legislation, copyright of works of the different countries mentioned in the International Copyright Order is protected in India, as if such works are Indian works. The benefits granted to foreign works must not extend beyond what is available to the works in the home country and only on a reciprocal basis, i.e., to say the foreign country must grant similar protection to works entitled to copyright under the Act. In particular, regarding Registration of Copyright Application found on scrutiny of the application that the work submitted for registration under the Copyright Act 1957 was already registered in the United States of America. Hence, a discrepancy was raised.

The Learned Registrar of Copyrights observed that “In accordance to the provisions of Section 40 of the Copyright Act, 1957, read with International Copyright Order 1999 states that the copyright of nationals of countries who are members of the Berne Convention for the Protection of Literary and Artistic Works are protected in India. A list of such countries is made available in Part 1 of the Schedule mentioned under the International Copyright Order 1999.” Further, the Learned Registrar of Copyrights agreed that an Applicant wishes so, he may also seek registration of their works in India by complying with the Copyright Act 1957 and Copyright Rules requirements 2013.

The aim of the copyright conventions/agreements/treaties is focused on the principle that the original creativity or works of the mind, which is the subject matter of protection under copyright law, should be disseminated and distributed regardless of their national borders. The simple principles of the major Copyright Conventions are as follows:-

It means that such national treatment shall not be depending on any formality, i.e., protection must not be conditional upon compliance with any formality.

Principle of “Independence” of Protection

It means that the enjoyment and exercise of the rights in a protected work in a specific country is independent of the existence or nonexistence of protection in the country of origin or any other country.

Read our article:What type of Works Protected by Copyright in India?

The international treaties encourage reasonably coherent protection of copyright from country to country. They set minimum security standards, which each signatory country then implements within the bounds of its own copyright law.

In 1886, the Berne Convention was adopted to protect original works and the legal rights of their authors/creators. It protects creators such as authors, musicians, poets, painters, etc. with the means to control how their works are used, by whom, and on what terms. The Foundation of Berne Convention was based on three basic principles. This contains a series of provisions determining minimum protection to be granted and special provisions available to developing countries that want to make use of them.

The three basic principles are the following:

Before the Berne Convention, there was very little protection for authors outside their home country. The Berne Convention protects the Literary and Artistic Works is an international copyright agreement that covers an artist when their work is published or produced outside their country of origin. It protects their right to authorize translations, reproductions, adaptations, performances, broadcasts, or other communication of their work.

India is a Signatory of Berne Convention

Berne Convention enforces a requirement that countries recognize copyrights held by the citizens of all other parties to the convention. That means Indian copyright law applies to anything published or performed in India, regardless of where it was originally created.

UCC covers the author’s works who is a national or domiciliary of the country that is a member of these treaties or the works first published in a member country or published within 30 days of first publication in a Berne Union country may claim protection under them. Under the UCC, any formality in national law must be satisfied by the use of a notice of copyright in the form and position specified in the UCC.

The UCC notice must consist of the symbol © (C in a circle) accompanied by a year of its first publication and the name of the copyright proprietor. This notice has to be placed in such a manner to give reasonable notice of the claim to copyright.

Following the features of TRIPS are as below:

Following the features of WIPO are as below:

The Copyright Act, 1957, was established with a quasi-judicial body called the Copyright Board, which is now merged with Intellectual Property Appellate Board (hereinafter referred to as the ‘Appellate Board’) according to Finance Act 2017[1], with effect from April 01, 2017. The Appellate Board is assigned to adjudicate disputes relating to copyright registration, assignment of copyright, a grant of licenses in respect of works withheld from the public, unpublished Indian works, production, and publication of translations, and works for certain specified purposes. Further, it hears cases in other miscellaneous matters instituted before it under the Copyright Act, 1957.

An author who wishes to have copyright protection for his or her work in a particular country must first determine the extent of protection available to foreign authors’ works in that country. If possible, this should be done before the work is published anywhere, because protection may depend on the facts existing at the time of first publication.

Some countries offer no copyright protection to any foreign works. Corpbiz has a piece of information on the requirements and protection provided by other countries. It may be advisable to consult an expert familiar with foreign copyright laws.

Read our article:Copyright Registration in India – Process, Requirements and Duration

License and Assignment of Copy...

The copyright is a certification provided to people of the different field for acknowledging their intellectual inp...

How To Obtain Copyright Regist...

Significant mental activity is needed while creating the original content or any other kind of artistic work which...