Potential Scenarios under which Consumer Grievance can be Filed 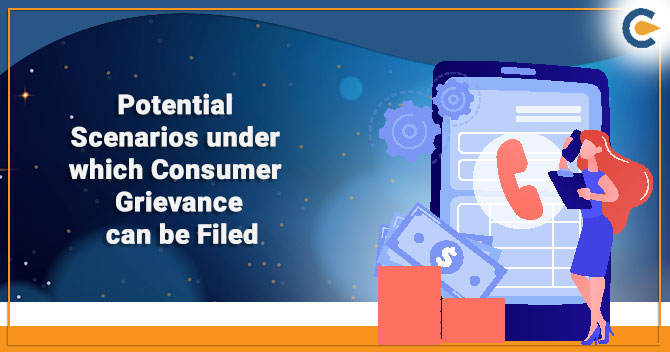 No matter how good is your market strategy is, the customer remains the king as per the old saying. But sometimes, companies tend to deceive their customer base by selling faulty goods or services for the sake of additional profit. The government of India has empowered the citizens of this country to leverage legal action against such misconduct. After being defrauded by an act like this, the consumer has the authority to file a written compliant via offline and the online mode on the Government-driven platform. The recent times, customers have become more sensitive towards the protection of consumer rights. In this write-up, we will talk about Potential Scenarios under which Consumer Grievance can be Filed.

The fundamental rights which every customer possess and statutorily conferred by the Consumer Protection Act, 1986 are –

If any of these rights mentioned above are breached, then it is the end-user’s accountability to lodge a consumer grievance. Filings of consumer grievances limit the misconduct of trade and strengthen citizens’ belief in the country’s legal framework.

Circumstances under which Victims can File Consumer Grievance

Following section manifests the list of practical trade malfunctioning that are worthy of being reported to the authority:

Making a considerable amount of profit is the ultimate objective of all the business. But leveraging unfair trade practices seem to have grown to a significant extent in the past few years. Tricking the end-users with invalid pricing or compromised quality has become common these days. Therefore, if there is any misconduct involved in any transaction, the consumer has the legal advantage to lodge a consumer grievance before the appropriate forum.

Adding harmful substances to edible items has become a common practice today. Food adulteration is regarded as an illegal practice in India and but it is still prominently used by many companies for the sake of additional profit. Mixing sawdust in spices or mixing ghee with “dalda” is a typical example of Food adulteration.

Sadly, adulteration is now extending its footprint in drug industries under the regime of unfair trade practices. Food Adulteration is an offense and treated accordingly as per the provision of the Indian Penal Act. Therefore, there is no harm in intimating the relevant authorities when customers erroneously encounter such a situation.

Most of the grocery stores in our country are engaged with malpractice of trade. They often trick the end-users by rendering them false implications of the weight for a given product. Customers often fail to depict such errors due to the lack of awareness or pertinent information. Apparently, such activities lead to the downfall of the consumer interest.

Invalid Information about Products and Services

In this age of digitalization, everything is moved online. Practically, it’s impossible for one to measures the comprehensiveness of the web-based marketplace. But every form of technology has some inherent downsides, and e-commerce stores are no exception here.

Most of the e-commerce operators (excluding the mainstream ones) are involved in the malpractices of trade and cheats customers every now and then through misrepresentation of information related to price and quality. Fortunately, the legal framework of the country has the provisions to penalize such acts also.

In a nutshell, the success of any organization revolves around the customer’s satisfaction and trust. But for the sake of additional profitability, many companies do not even hesitate to put such values on the stack.

There were instances when customers were tricked by the companies’ false promises concerning their products and services. When such things happen, customers are left with no other option than to seek justice through a legitimate process.

Not all customer service representatives are swift enough to respond to customer grievances. The company that claims to render end-to-end support to their customers often breached their trust with mediocre services.

Putting customers on the phone line for hours or is a typical example of misconduct of trade practiced by such companies. Fortunately, the customers who confront such anomalies every now and then can share their concerns with the relevant authorities. By doing this, they even have the authority to sue the defaulters for poor services or products.

Online payment is a kind of a blessing in this current era as it allows customers to pay for services or products with a blink of an eye. But it seems that this technology has got into the wrong hands now. Many individuals are not using this platform to reap illegal income by soliciting customers to complete a certain task or to avail certain services that do not exist in the real world.

Every year thousands of victims lodge their compliant regarding such offenses; that typically went by unnoticed due to the lack of evidence. Apart from intimating the local police authority, the victim of such crimes can report such incidents to INGRAM, a web-based portal that deals with customer rights violations.

The government of Indian[1] has taken various measures for the protection of consumer’s rights. After the commencement of the web-based portal INGRAM (Integrated Grievance Redress Mechanism) deployed by the department of consumer affairs, customer grievances’ reporting has become easier than ever. All victims need to register to this portal and fill a simple form to lodge a consumer grievance.

As soon as your request is verified, the portal will generate a docket number so the applicant can use it for future reference. The portal also renders the benefit real-time status tracker that enables the applicant to keep track of their request regarding the consumer grievance all in real-time.

Read our article:Here are the Steps to File a Consumer Complaint in India

How to File a Consumer Complai...

Filing a consumer complaint against the builder outside the regime of RERA is now simple than ever. Complainants ar...

Generally, once the consumer is disrupted by the infringement of a specific consumer right or other ways, they can...