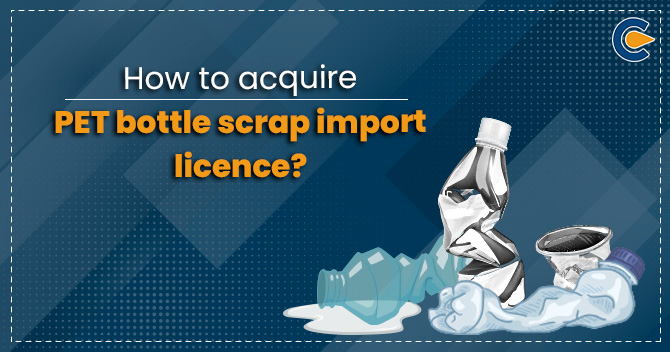 As per the recent reports of the United Nations, the population of the world is estimated to increase by two bn. in the next 30 years, almost reaching from 7.1 billion in that is current population to 9.7 in 2050 and nearly 11 billion in 2100. This dramatic hike in the population has resulted in an increase in demands and requirements of people and hence an increase in the consumption of plastic products. Plastic products have dominated our lives for more than half a century taking over every aspect of our lives, right from baby toys to Water bottles. The Ministry of Petroleum and Natural Gas has estimated that plastic consumption per capita will reach 20kgs by 2022.

Due to this, India is becoming a booming market for recycling units. Still, due to a lack of awareness among people regarding recycling, leading to less raw material for recycling plants, there is seen as a necessity to establish an import unit for plastic materials for which the importers would require to acquire a PET Bottle scrap import license.

What constitutes as Plastic Waste?

Plastic deriving from the term “Plastikos” means a material which is suitable for moulding, which describes various properties of the material/Plastic such as Plasticity and malleability. Plastic, because of its complex structure, has many different types, including:-

With these many types, plastic is considered one most used materials, which is also most responsible for increasing pollution and waste in India. As per the CPCB (central pollution control board) report recording the 8% contribution of plastic in solid waste, Delhi is number one, followed by Kolkata and Ahmedabad in the matter of producing the maximum quality of plastic waste. Along with this, during the latest reports as per Union Environment Minister, India generates around 3.5 mn. Tonnes of plastic waste per annum, with only 60% being recycled.

Poly Ethylene Terephthalate, or PET, is one of the more widely used plastic-type in India, with over 0.9 million tonnes of production. With this much production, PET also contributes to an increasing pile of plastic waste, with PET bottles generating 7.27% of plastic waste all around the world. It is estimated that around 480 billion plastic bottles were sold in 2016 across the globe, coming a long way from 300 billion just a decade ago.

This amount of plastic bottles contributes most to the plastic waste creating the urgent need for more recycling businesses and plants as well as import units to be established across the world. This is so that plastic waste can be sent from high consumption countries to low consumption countries, benefitting both states firstly by decreasing the amount of plastic waste in one state and increasing the raw material required for recycling in another state to increase its overall market and development.

Need for Import of Plastic in India

Although the plastic consumption and generation rate in India is going through the roof, the amount of plastic that actually goes for recycling in recycling units is still very low, resulting in less raw material for the recycling units. Due to this, recently government lifted the ban on plastic waste import that was imposed in 2019 because of the hike in the import rates from 12,000 tonnes in FY16-17, which increased at the rate of 290% in Financial Year 2017-2018 up to 48,000 tonnes. But then, in 2021, around seven companies filed an application for the Import of 93,000 tonnes of plastic waste from countries like Germany, Canada and America. After this application and concern from many other industries, the Import of plastic having 50% recycling capacity was allowed to be imported up to 90,000 tonnes.

Although the ban is lifted in India regarding plastic scraps, the government to regulate the influx of PET Bottle scrap made it mandatory for the importers to acquire PET bottle scrap import licence, which has been decided through the consultation with Department of Chemicals & Petrochemicals and Ministry of Environment, Forest and Climate Change.

Documents required for an application.

Acquiring a PET bottle scrap import licence has been declared mandatory by the Ministry of Environment, Forest and Climate change in order to regulate the unwanted influx of Plastic Waste, especially from developed countries, which are notorious for dumping their plastic waste on the developing countries.

Read our Article:How to Acquire a Battery Scrap Import License in India?

Computers and other EEE (Electric and Electronic Equipment) have become the basic necessity of human life with comp...

In recent years the amount of illegal imports has increased in India, leading to an irreversible environmental cris...