What is a Non-Government Organization and how does it work? 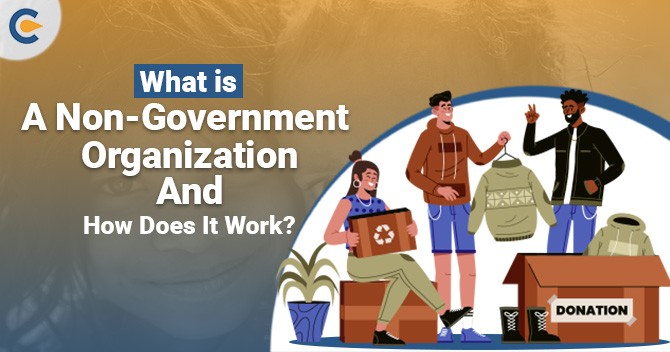 The Non-Government Organization, in common parlance, are the associations involved in carrying out extended activities for the benefit of needful people and the society at large. As the name makes known, NGOs work independently, without any financial aid from the government. Although, they may work in close interaction with the government agencies for carrying out their projects. In this write-up, you will come across what is an NGO? and how NGOs work.

What is an NGO?

NGOs are non-profit bodies that run on donations made by individuals, corporations, and institutions. Non-Government Organization raise funds for carrying out their objectives. In India, ever since independence, NGOs have played a crucial role in helping the needy by providing aid to the distressed and boosting the socio-economic status of millions in the country. NGOs take up and carry out projects to encourage the welfare of the society in which they work. In India, Non-Government organizations address various concerns and issues prevailing within the community.

NGOs works with the experts in executing social welfare activities. Before starting a project, Experts do a detailed analysis of the situation and contemplates the possible solutions. Also, NGOs Collaborate with civic agencies and other government agencies at the district, state, and national level) to carry out the activities of the projects.

A Non-Government Organization is an association registered under various laws and acts and works for the upliftment of society. Before starting an NGO, an individual must consider the following the following features-

In India, an individual is free to perform social-economic activities without getting registered under various laws. However, for proper management, it is essential to get the NGO registered. In India, the structural types of NGO are –

Based on the type of structure, an applicant shall follow various acts and laws prescribed in the Act.

Note: It is mandatory for Non-Government Organization receiving foreign funding to get register under the FCRA. The decision taken by the authority is expected to be beneficial for various NGOs and other entities whose registrations have expired since September 29, 2020.

What work does an Non-Government Organizations perform?

Among the wide variety of roles that a non-government organization plays while working, the below-mentioned work are the essential roles NGOs perform-

Also, the NGOs create awareness among the people on current environmental issues and get involved in the human protection right to have a clean environment. Also, NGOs organize various seminars and group discussions for promoting environmental awareness.

In India, NGOs perform various activities in helping the villagers, administrative officials in the execution of projects and educate them on various topics that help the villagers finishing their work in a hassle-free manner.

Legalities to be followed while working as an Non-Government Organization

In all countries, the laws that call for registering NGOs as legal entities typically require

Registering the organization as per various acts and laws. i.e.-

How NGOs work in India?

India has made rapid progress in understanding the importance of education, health care, women empowerment, poverty, and literacy. Millions have been brought out of poverty, the literacy rate has step-up, and people have better access to healthcare services. However, considering the vastness of India both in terms of geography and socio-cultural diversity millions, are in search of a decent life. People in India are still struggling to get basic things such as health, shelter, education, and nutritious food.

The economic progress of India is still not uniform in nature. There is rampant economic inequality. Non-Government organizations come into the picture to support the government. The role of NGOs is to close the gaps left by the government by upgrading the lives of the most marginalized people. In India, Non-governmental organizations help the government[1] in fulfilling the desired objective. As there is still a large population in India lacking in the areas-

Apart from this, thousands of NGOs are known for their role in the field of development so that people can create awareness in interventions, if necessary. In India, NGOs have resolved many social and development issues such as-

NGOs are playing a vital role in nation-building. NGOs are not only helping the urban sector but also providing various facilities in the rural sector. NGOs are helping by educating the farmers and introducing them to new techniques that can help them in achieving the best results. NGO helps the farmers getting the latest updates of new cost-saving technologies and new seeds and pesticides available in the market at a reasonable price.

Over the years, Non-Government Organizations have played a vital role in society. Also, NGOs are working on international platforms to support their nation. Depending on their structure and objective, NGOs can perform various activities. Commonly, they’re divided into either operational or advocacy NGOs but may serve both functions simultaneously. NGOs also conduct research work with governments and institutions to contribute to development. NGOs get their funding’s through membership dues, donations, charity, and loans. For smooth functioning, many NGOs receive some funding from government organizations, but their status remains independent. We must note that the Legal designations and rules on how NGOs can use their funds vary from one country to another.

Read our article:Form CSR-1: Why it is Mandatory for NGOs?

Know Everything about Presiden...

President, Secretary, and Treasurer are the volunteer to serve the best to the Trust organization with super limits...

A Brief Overview on Bye-Laws o...

In the legal context, a registered society is known as the group of enthusiasts that works for the betterment of so...