Everything you need to know about One Person Company in India 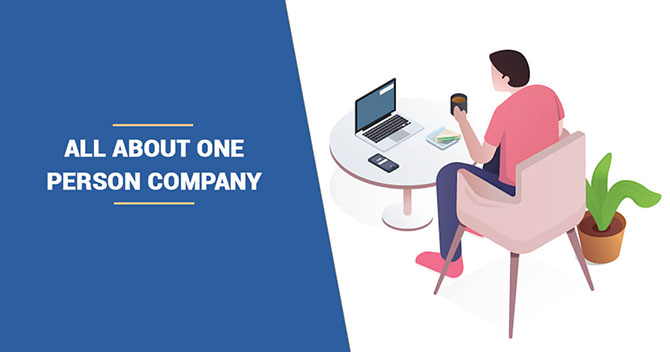 The concept of a One Person Company in India is a type of company which was first introduced in the Companies Act, 2013. This type of concept of a company was not existent before that in the older Companies Act of 1956. Furthermore, this type of entity structure was introduced to simplify the complex procedure and compliance requirements that come along with other types of business models. Also, do you know that the UK was the first county that came up with the idea of forming this type of business entity? Keep reading for more interesting details about One Person Company Registration.

According to Section 2 (62) of the Companies Act, 2013, a OPC is defined as “a company which has only one person as a member.” Therefore, as per the definition, as defined by the Companies Act, 2013 means that a company that has only one shareholder as a member of the company is a One Person Company in India. Generally speaking, a OPC is founded by only one founder or promoter.

The concept of One Person Company in India was mooted, in the report of Dr J.J. Irani Committee. Thereafter, the Irani Committee briefly referred to the OPCs in its report. Furthermore, in Chapter III titled “Classification and Registration of Companies” the committee suggested multiple classifications of companies as given hereunder.

The OPC concept holds a bright future for small traders, entrepreneurs with low risk-taking capacity, artisans and other service providers. The OPC would act as a launch pad for such entrepreneurs to showcase their capabilities in the global market.

Read our article:A Complete Guide on One Person Company Registration in India

Salient features of One Person Company in India

Why Should We Choose OPC?

Few of the reasons to choose One Person Company are given below:

Separate Legal Entity:  OPC protects the liability because the asset of the director and that of the company are considered different. Hence, the director’s personal assets are not used to pay the debts of the company.

More credibility: The registration of the company with the Ministry of Corporate Affairs gives it more credibility and reliability with the stakeholders. Because of this reason it also helps the business in its expansion.

It enjoys perpetual succession:  the company shall continue even if the director has resigned or there is a change in the company.

With the Union Budget 2021, our Hon’ble Finance Minister proposed various tax and regulatory changes focusing on infrastructure development. There are some noteworthy changes in the field of corporate laws. With respect to One Person Company Finance Minister said that such measures shall be taken which directly benefits the innovators and start-ups and also proposed to incentivize the incorporation of One Person Companies (OPCs) by permitting the OPCs to grow without any limitations on turnover and paid up capital, and also allow them to convert into another type of company any time. Besides, the budget has reduced the Indian citizen’s residency limit to incorporate an OPC from 182 days to now it is 120 days and has also allowed the Non Resident Indians (NRIs) for incorporating the OPCs in India.

Read our article: Comparison between OPC and LLP: Advantage of One Person Company

How one can start One-Person C...

The One Person Company concept was launched for a good refinement over a concept of sole proprietorship. A single p...

In the past few years, the legal paradigm of one-person companies has helped several startups and persons looking f...