Maintenance and Inspection of Documents in Electronic Form 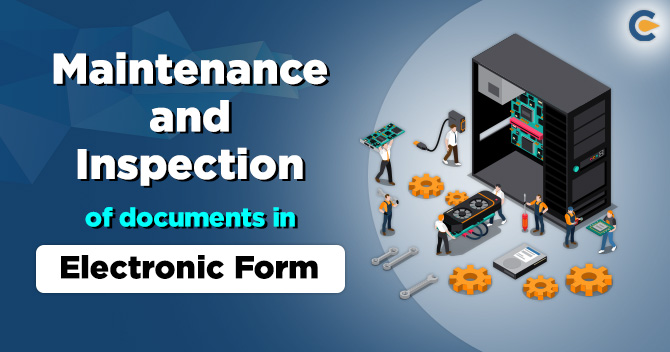 In India, mandatory provision was inserted under the Companies Act, 2013, which requires every registered company to maintain statutory records of company in form of books of account, records, minutes etc. In erstwhile companies Act, companies were required to maintain physical copies of its financial records. But with the Companies (Amendment) Act, 2006 emphasis was given to electronic filing of documents. But still, there was major missing about methodology in order to maintain electronic documents. With the inception of the Companies act 2013[1], specific provisions were provided in order to define records in electronic forms

Where provisions w.r.t. Maintenance and inspection of electronic documents are defined?

“120. Without prejudice to any other provisions of this Act, any document, record, register, minutes, etc.,—

(a) required to be kept by a company; or

(b) allowed to be inspected or copies to be given to any person by a company under this Act, may be kept or inspected, or copies were given, as the case may be, in electronic form in such form and manner as may be prescribed.”

So as per the said section, companies are required to maintain the records of company in electronic form and further allow inspection or give copies of the same as per prescribed manner. Further, certain guidelines also have been provided under the Companies (Management and Administration) Rules of 2014 for preservation and inspection of records in electronic form.

What is the definition of records?

Here term ‘Records’ comprises of any ‘Books & Papers’ or ‘Documents’ as defined under section 2(12) and section 2(36) of the companies act, 2013 respectively. Further, the term ‘Records’ can be defined as registers, minutes, records, indexes, memorandum, agreements or any other documents as required by companies act to be maintained by a company as defined under Rule 27 of the Companies (Management and Administration) Rules of 2014.

Does this maintenance in electronic form is applicable for all companies?

Maintenance of records in electronic form is a mandatory provision for all listed companies and for companies which have shareholders, debenture holders or security holder’s number not less than One Thousand (1000). These companies are required to maintain records as per prescribed rules and guidelines prescribed for maintenance of electronic records. For other companies, it is an optional provision.

And any existing company was required to convert the data from physical form to electronic form within a time period of 6 months as per prescribed guidelines, i.e. on or before 01.10.2014.

What points need to take care while maintaining electronic records?

Physical, as well as electronic records, are to be maintained by companies as directors or other key personnel’s of the company may deem fit. But certain pointed need to take care while maintaining, such as:

Who is responsible for maintenance of such records in electronic form?

Any person who is authorized by board of director can be given the responsibility of maintaining such records.

What are the various responsibilities of the person authorized with such powers?

Such person as authorized by board of directors has below-mentioned responsibilities:

Provisions regarding maintenance and inspection of records in electronic form

Every company maintains electronic records of data have duty to maintain data in such form so that:

Such provisions have been given under the Companies (Management & Administration) Rules, 2014 for inspection and taking extract of such records. As per that any person can do online inspection of records of company or get such records as required on payment of the prescribed nominal fee that should not exceed Rs. 10 per page.

Penalty in case of Non-Compliance

In case a company or its authorized person fails to comply with such provisions w.r.t. Maintenance and inspection of documents in electronic form then, in such scenario such company or authorized person can be penalized for amount up to Rs. 5000. In case of continuing default Rs. 500 per day can be imposed.

Read our article:What is Quorum For Board Meeting in Regards to Companies Act, 2013?

What is Corporate Social Respo...

With globalization Corporate Social Responsibility (CSR) has got much recognition during the past few years. It has...

What Exactly “Company to Rep...

The Companies Act, 2013 represents a Charge as an interest or claim formed on the assets or resources of a Corporat...