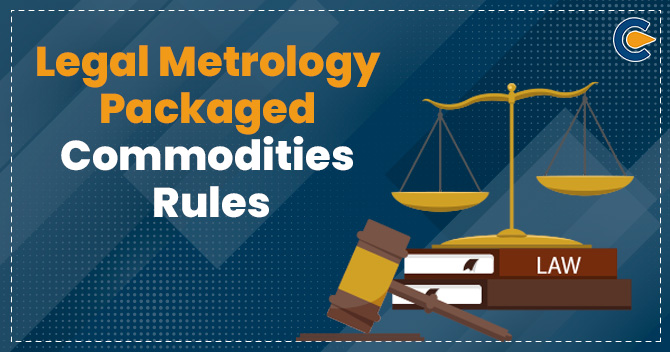 Legal Metrology is a term defined as the legal requirements that are required to be fulfilled for governance over the utilisation of standard weights and for any source of instruments that are utilised for the purpose of measurements. The essential objective of the Legal Metrology Packaged Commodities Rules, 2011 is to ensure that a public guarantee is being provided for the terms of determining the security and accuracy of Weighments and Measurements.

The Legal Metrology Act[1], 2009 was implemented by the Department of Consumers Affairs, under the governance of the Indian Government for the purpose of enacting provisions specifically covering provisions of the now repleaded act –

The following are the Rules enacted by the Department of Consumers Affairs, under the governance of the Government of India, to be read along with the Legal Metrology Act, 2009 –

Declarations for each Packaged Commodity

In accordance with the Legal Metrology Packaged Commodities Rules, the Department of Consumers Affairs has enacted certain declarations to be mandatorily followed for each and every type of packaged commodity, which are mentioned as follows –

Along with the Rules mentioned above to be followed mandatorily, the government in the Legal Metrology Packaged Commodities Rules has implied that 19 Commodities are to be Packaged in the prescribed sizes as mentioned in the Regulations that is in the interest of the Customer.

With Reference to the Notification issued on 2nd November 2021, amendments in relation to the Legal Metrology Packaged Commodities Rules were scheduled to come into effect on 1st April 2022, which is rescheduled with an extension on 1st October 2022, as per the recent Notification issued by the Government of India on 28th March 2022 in accordance with the amended LMPC Rules that is also to come on effect on the same date.

Clarifications for the USP under the latest Amendment

The below mentioned are the clarifications made for the Unit Sale Price, also known as the USP, in accordance with the latest amendment of the Legal Metrology Packaged Commodities Rules –

Due to the Extension provided, the Producer, Packager, and Importer have been furnished with an additional time frame to conform in accordance with the Amendment Rules 2021. Post 1st October 2022, every one of the Producers, Packagers, and Importers would be expected to reevaluate and revise their Packaged Commodity that is to be consistent with the new set standards.

Read Our Article:What are the Legal Metrology laws in India?

As per a Government Press Release on o4 October, 2022, the Consumer Affairs Department, Indian Government has amend...

Role of Legal Metrology in Foo...

Rules under Legal Metrology are a set of guidelines granted by the Department of Consumer Affairs that deal with me...