Law of Passing Off of Trademark in India 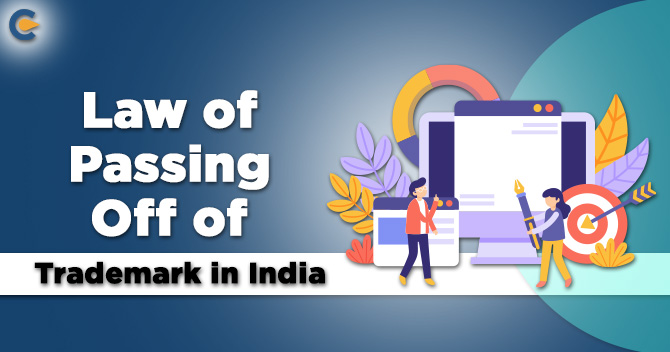 As the economy is growing, trades are now increasing at a rapid pace. To symbolize and recognize the products and services associated with the trade, the traders of a trade associate themselves with name or mark by which the products and services of traders are known to general public at large. This mark or name is known as Trademark. The Trade Mark Act, 1999, read with the Trade Mark Rules, 2002, gives rights related to the Trade Mark. These rules and regulations provide a plenty of rights to the holder of the registered Trademark and to the person whose application is pending for Registration in the Trademark registry. The person whose application of Trademark registration is pending can stop the use of similar or identical marks by the Law of Passing Off of Trademark. In this article, we will discuss the provisions related to the Law of Passing Off of Trademark in India.

What is the meaning of Passing Off?

In the case of Perry vs. Truefitt [1842], the principle of Passing Off was laid down for the first time. The principle of Passing Off was that no one has the right to represent his goods as the goods of someone else. The law of Passing Off has changed a lot over the time. Earlier, the law was restricted to representing one person’s goods as another person’s. Later on, the law was expanded to trade and services and also to business and non-business activities. Now, the law is applicable to various forms of unfair competition, and unfair trade wherein the activities of one person harms the goodwill associated with the activities of another person or group of persons.

It is hard to prove Passing Off, as the claimants are required to prove that some of the public is at risk of some confusion between the two businesses. The most significant and important question in Passing Off is whether the conduct of the defendants is such as to confuse the public between the two businesses. The act of misrepresentation of the other party often damages the goodwill associated with a person or business, hence, causing reputational or financial damages. In the Trademarks Act, 1999[1], Passing Off is defined in Section 27 (2), 134 (1)(c), and Section 135. The power or jurisdiction of the District Courts in the matter related to Passing Off of Trademark suits. Under Section 134 (1)(c) of the Trademark Act, 1999, the provisions related to try the suit or issue injunction are provided.

There are two kinds of Passing Off, which are as follows:

One of the cases where Passing Off is actionable is the extended form of Passing Off. In this form of Passing Off, a misrepresentation on behalf of the defendant in reference to a particular quality of products or services causes harm to the goodwill of the plaintiff. For example, in the case of Erven Warnink vs. J Townsend & Sons (Hull) Ltd {[1979] AC 731}, in which the creators of advocaat sued the manufacturers of a similar drink but not purely identical to advocaat, but the other drink was marketed successfully all over the market as being advocaat.

What are the essential elements of Passing Off of Trademark in India?

It should be proved by the plaintiff that the person or the goods and services own some kind of reputation in the mark used by the other person, and such an act of using an identical or similar mark will confuse the public with the specific goods or services of the plaintiff. The concept of goodwill is more broadly defined in the case of Trego vs. Hunt.

In order to stop the infringing party, the offended party is required to prove that he/she has suffered an actual or reasonable loss of business due to the alleged misrepresentation of the infringing party. Generally, the loss is difficult to prove and involves the inspection of books of account of both parties on certain practical grounds. The possibility of loss is sufficient to prove that there is damage to goodwill of the plaintiff. Hence, the plaintiff is required to prove that the misrepresentation from the side of the defendant has harmed the goodwill or cause loss to the reputation of the plaintiff.

What are the remedies for Passing Off of Trademark in India?

The plaintiff is required to apply for an injunction prohibiting any other person or business from using his/her Trademark or goodwill of the products or services. An Injunction is ordered to prevent any further use of the Trademark by the defendant. The passing of an injunction is an effective remedy for the prevention of any type of Infringement of registered Trademark or unregistered Trademark. The Trademark Act, 1999, under Section 135, provides injunctive relief to the plaintiff.

An injunction can be ordered in various types which are as follows:

The Anton Piller Orders are prior partial orders to inspect the premises of the defendant. The court may order the plaintiff in a case where the defendant is likely to dispose or destroy the materials or substances which contain the Trademark of the plaintiff.

In such an order of Mareva Injunction, the court has the power to freeze the assets of the defendant, where the property of the defendant is likely to be canceled or dissolved, so any judgement granted against him will not be enforced.

It is the most common form of an injunction that is ordered by the court. An interlocutory injunction acts to take certain action against the defendant based on some former violation. An interlocutory injunction is an order to prohibit the continuous usage of the Trademark of the plaintiff by the defendant, which is leading to an infringement of the unregistered Trademark of the plaintiff. The main objective of this order is to prevent one from any further infringement of an unregistered Trademark.

Perpetual Injunction is an injunction that prohibits and prevents the defendant completely, for all time, from performing any such acts that violate the exclusive rights of the owner of the unregistered or registered Trademark. Usually, a perpetual injunction is granted when the suit of Infringement is finally settled by the court.

The Damages provided to the real owner are compensation for the loss, which was incurred by the real owner. The loss can be recovered from the defendant in the form of such compensations by the real owner of the Trademark. The monetary worth or value of loss for reputation or financial loss of the brand of the owner is recovered under damages provided by the court. The court will award the total amount of the damage and account of lost profits after taking into consideration the certain and actual loss of the owner of the brand because of the Passing Off.

What are the defenses available to the Infringing party for Passing Off of Trademark in India?

The defenses available to the infringing party in case of Passing Off of Trademark are as follows:

What are the case laws related to Passing Off of Trademark in India?

The case laws related to Passing Off of Trademark in India are as follows:

In this case, the respondent filed a civil suit against the appellant for Infringement of copyright of the trade dress of the product of the respondents ‘Sunfeast Farmlite.’ The court said that the exclusivity and appropriation claimed regarding a get-up and particularly to a color combination stands on a different platform from a Trademark or a Trading name because colors and the combination of colors are not characteristically and inherently distinctive.

Therefore, it should not be easy for a person to claim exclusivity over a combination of colors, particularly when the same color combination has been in usage only for a short time period. It is possible only when it is established that the color combination has become distinctive of a product for a person so that an order for Infringement can be made in his/her favor who is using the distinct color combination. The court felt that such a distinctiveness is not present in this case. Hence, when the first element of Passing Off of Trademark was not established, the court was of the opinion that there is no need to examine the other aspects of misrepresentation and the likelihood of damage. Thus, the suit was dismissed as there was no case of Passing Off of Trademark.

The plaintiff filed a suit for Trademark Infringement and pleaded for an order of permanent injunction against the defendants, as the plaintiff wanted to prohibit and prevent the use of the aforesaid marks, as an amount for the Trademark Infringement as well as Passing Off of Trademark of plaintiff. The court held that the two Trademarks, ‘Nimson’ and ‘Nirma,’ are semantically and phonetically different. Further, the court said that the trade classes and channels of consumers of goods and services sold by both of them under these aforesaid marks are also totally different. Hence, the mark ‘Nimson’ is not deceptively similar to the mark ‘Nirma.’

But on the other hand, in the case of ‘Nimma International,’ the opinion of the court was different. The defendant’s documents failed to prove ownership of any registered Trademark in the matter of ‘Nimma,’ while in the case of Plaintiff the Registration of Trademark in the matter of the mark ‘Nirma’ was very strong and also had a reputation of three decades. The use of the mark ‘Nimma’ by the defendant will create confusion in the mind of the general public and will make the public to believe that the goods and services under the mark ‘Nimma’ belong to the plaintiff. Hence, the court allowed the defendants to use the mark ‘Nimson,’ but the use of mark ‘Nimma’ was restrained.

Read our article:Basic Definition of Trademark Registration, Objection and Assignment

The Trademark Registration Process is required when an individual seeks comprehensive protection of a mark against...

The protection of IPs is a must-have requirement for the company to stay stronger in the existing market. A company...