What is the Impact of GST on Loans? 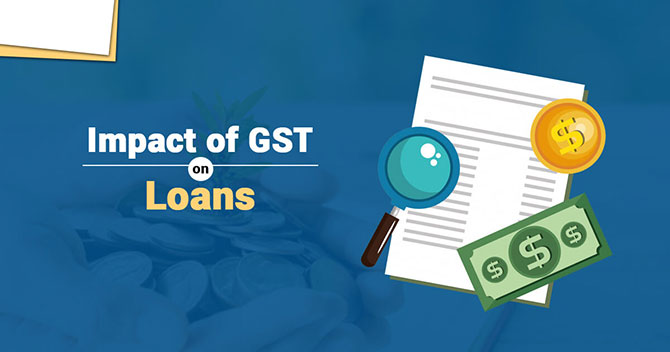 Right from the very beginning, we are taught to distribute things among our siblings equally, be it a bite of a cake or the division of the wealth among the children. The same concept must be applied while paying the tax for the products we consume. Different tax rates are paid across the different states for the purchase of the same product we buy or the services we avail.  In a move to make this tax structure uniform, GST (Goods and Services Tax) came into the picture.

One Nation, One Tax and One Market is the move of the NDA government which aims to unite India’s market, empower the producers and strengthen our consumers. With the implementation of GST, all the other Central and State taxes have been subsumed within it. A separate committee was established to redesign the GST model of our country, and finally, Prime Minister Narendra Modi[1]officially launched the GST in the hall of Parliament on 1st July 2017. The after-effects of GST can be seen in all the sectors of the economy, including financial and banking services.

What is the new GST Tax Structure?

The government has simplified the GST tax structure, and now the goods and services are taxed at the following rates of 5%, 12% and 18% and 28% in which few of the goods are exempted from the GST tax rate. There has been an increase of 3% in the service tax applied in the banking sector. Earlier, it was 15%, but now it is 18% after the implementation of GST. Here, in this article, we will see the effect of GST on different types of loans such as Personal Loan, Home Loan, Car Loan etc.

Impact of GST on Personal Loan

Note: GST is not levied on the EMIs of the home loan, personal loan and auto loan.

Impact of GST on Home Loans

Having your own home is the greatest treasure one can enjoy while buying it. For this purpose, you usually avail home loans from banks. Earlier, before the implementation of GST, the processing charge was generally charged between 0.25-1% of the loan amount availed. Post GST, the service tax is charged at the rate of 18% which was earlier charged at 15%.

However, a clear scene is available here:

Read our article: Are You Aware Of The Liabilities Under GST In Case Of Death And Dissolution?

Impact of GST on Vehicles

After the implementation of the GST, the processing fee can be 1%-2 % of the loan amount, whereas the prepayment charges lie between 2%-6%.

The different tax rate applies to another type of vehicle.

Effect of GST on Car Loan (Personal Use)

The vehicle used for personal use lies under the GST range of 5% to 12%. Cars, bicycles, bikes etc. are categorized under this kind of car loan. The impact of GST is also applicable to the accessories of these vehicles. Auto-rickshaws, hand carts etc. are charged at the lower slab rate of 12% because they are the source of income for poor people. Whereas 18% of the GST applies to the vehicles such as baby carriages and cars for physically challenged people.

Motor vehicles which use petrol or diesel are charged a higher percentage of GST that is 28%.

Effect of GST on Commercial Vehicles

The vehicles which are used for carrying passengers and goods are known as Commercial Vehicles. For example, public buses, trains etc. The GST rates for these vehicles vary between 12% to 28%. The scooters and motorcycles with the capacity of engine of up to 350cc have a 28 % GST, but there is no cess. Whereas, the GST for bigger motorcycles is 3 % cess over and above 28 % GST, which shall result in total tax of 31 percent.

A GST rate of 12% is applicable on the following vehicles:

A GST rate of 18% is  applicable on the following vehicles:

A GST rate of 28% is applicable on the following vehicles

The GST RATES on CAR

The final thoughts revolve around the increased GST rate after the implementation of the GST. But one can also say that we need to wait endlessly if we desire to have a fruitful result. It provided long term opportunities for the businesses, although it has a negative impact on the increase in the cost of loans. For any assistance regarding the GST Registration, reach us at Corpbiz.

Read our article: How Offences & Penalties Under GST Can Put In Trouble?

After seeking to provide relief to businesses and tax advisors on the basis of complexities in compliance and disru...