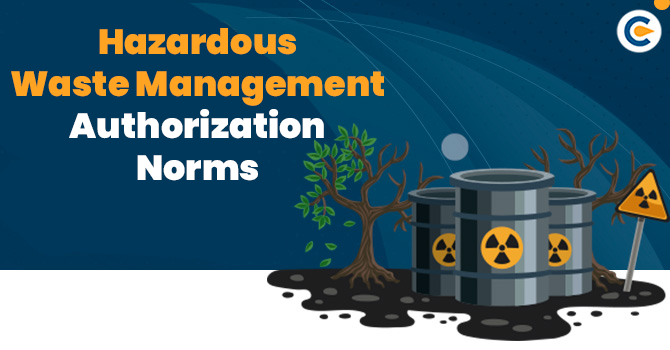 There are so many industries in India that emit hazardous pollution into the environment. Some of the prominent industries that discharge excessive pollution mainly belong to paint, fertilizer, chemical sector, etc. The legislation that regulates these industries is known as Hazardous And Other Wastes (Management and Transboundary Movement) Rules, 2015. This blog seeks to discuss the applicability of Hazardous Waste Management Rules in India.

As per the said rules, the term “hazardous waste” implies any waste which, because of traits such as biological, physical, reactive, chemical, explosive, toxic, flammable, poses a risk to human life and ecological balance, whether sole or in connection with other wastes and shall entail.

Authorization under Hazardous and Other Wastes (Management and Tran boundary Movement) Rules, 2015 is granted by competent State authority against the prescribed application and fees.

The said authorization is mandatory for the following industries.

The high quantum of common effect wastes such as red mud, fly ash, Phosphogypsum, slags, jarosite, from pyrometallurgical undertakings, mine tailings, & ore beneficiation rejects are not included in the category of hazardous wastes. The Central Pollution Control Board shall roll out separate directions relating to managing such wastes.

For widely recyclable hazardous waste as mentioned in Schedule IV, the directions already underpinned by the Central Authority shall be followed.

Provided that in the event of an application for authorization’s renewal, the relevant state authority may, prior to granting such authorization, satisfy itself that no conditions have been breached by the applicant for erstwhile authorization, and same must be recorded in the inspection report.

(1) The concerned State authority operating under MoEFCC[1] has the right to cancel or suspend the authorization granted under rule 6 in case of non-compliance. However, the authority shall not take such decisions without informing the applicant in writing and given a fair chance of being heard.

(2) Upon cancellation or suspension of the authorization, the competent state authority rolls out guidelines to the person whose authorization has been cancelled or suspended for the apt storage and management of hazardous wastes, and such occupier shall adhere to such directions.

The Hazardous Waste Management Authorization norms are quite diverse since it covers a range of industries under its ambit. It primarily aims to safeguard the environment and human life from the drastic effect of pollutants that are considered hazardous.

Read our Article:Meaning of Hazardous Waste and Legalities around it

As per United Nations University, the global E-waste worldwide is not properly collected and recycled on time. It i...