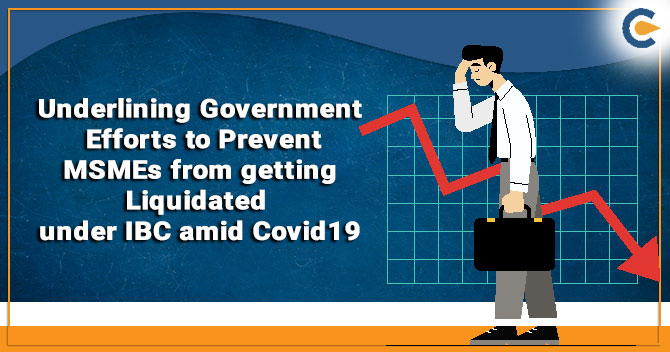 Micro, small and medium enterprises are significant contributor to the nation’s economy. It is also playing a pivotal role in creating job opportunities for skilled and unskilled youth of India. But, the arrival Covid-19 pandemic has dented their growth and left them in woes of fiscal instability and dearth of resources.

As a result, many MSMEs, particularly the new ones, have opted to shut down their operation, leading to the liquidation of their assets. As more and more MSMEs faded away quickly, the government tried to retaliate by inculcating mandatory provisions under the IBC. In this write-up, we will talk about the measure taken by the Indian government to protect MSME from getting liquidated under IBC amid the Covid-19 pandemic.

Significance of Micro, Small and Medium Enterprises in India

The notion of MSMEs comprises the first-ever legal framework for knowing the paradigm of enterprise, which involves both manufacturing and repair entities. It specifies medium-sized firms and seeks to bring together three tiers of the enterprises, viz- micro, small & medium. The Act also talk about the statutory consultative mechanism at the country level with a wide range of advisory functions and balanced representation of stakeholders’ sections.

MSME ensures industrialization of rural and backward areas, thereby bridging gaps created due to regional imbalances. Also, this sector help in deploying relatively low capital cost compared to more prominent firms. Micro, small and medium enterprises act as ancillary units for the large industries, and they are the key growth driver of the nation’s socio-economic development.

Read our article:How VCFO Services can Help MSMEs to Operate Better than Ever?

After the arrival of Covid-19, the entire working sectors were closed down except those which deals with medicines. It came as a sharp blow for manufacturing industries as they could not generate enough production orders. The pandemic pushed these industries to the back foot and faded their options to counter primary liabilities, including loans.

On the other hand, the creditors were left with no other option than to apply for liquidation under IBC before the tribunal to recover their funds with interest. A resolution professional come to play to liquidate MSME’s assets and settle claims of the creditors.

Previously, a threshold of Rs 1,00,000 as default was required to initiate the Corporate Insolvency Resolution Process. This led to the avalanche of applications that eventually caused trouble for the adjudicating authority.

Thus, a government came under the relentless pressure of reconsidering the minimum default threshold limit in view of section 4 of the code and reducing it to an optimum level to overcome such chaotic situations. Finally, the adjudicating authority responded by amending the said threshold limit.

Defending MSME from getting liquidated under IBC: Highlighting Amendments under IBC for MSMEs

Under section 4 of the IBC, 2016, the adjudicating authority amended the minimum default limit by raising it from 1 lakh rupees to 1 crore rupees. This means that the concerned creditor cannot file a petition under the IBC act unless the default threshold limits surpass the new limit, i.e. one crore rupees.

The provision came alive on 24th March 2020. Considering the state of crisis that MSMEs were encountering, this move was certainly welcome. Apart from mitigating the threat of being challenged in the tribunal, the decision helped many MSMEs to focus on their core issues.

Soon after the introduction of the aforesaid measure, the Ministry of MSME stepped forward to amend the threshold limit.

The criterion for MSMEs was as specified below

Micro Enterprises– where the investment in plant & machinery is not more than one crore rupees & where the turnover stays well below five crore rupees.

Small Enterprises– where the investment in plant & equipment is within the range of ten crore rupees & where the turnover is below the 50 crore rupees.

Shielding MSME from getting liquidated under IBC: Other Modifications Regarding CIRP

The MSMEs’ promoters who aren’t willful defaulters can bid for their assets. To do so, they need to file a resolution plan that acts as a counter-petition against potential suitors under a Swiss challenge. However, the authenticity of the resolution plan largely depends on the parties who approved it—approval from the valid financial creditors having a minimum of 66% voting power is more than enough in this regards.  This entire arrangement is only to distresses MSMEs and creditors who are having a tough time reconciling fiscal turbulence.

MSME is a growth-oriented sector that has a lasting impact on the Indian economy- thus, its well-being is immensely important. The Government[1] attempt to raise the default threshold scheme is indeed a proactive move as its shows their intention to resolve the issue at any cost. Undoubtedly, these measures have prevented MSMEs from getting liquidated under IBC, and hopefully, they will keep the economy moving forward in the right direction.

Read our article:Analyzing Provisions under MSMED Act for Payment Dues Toward MSMEs 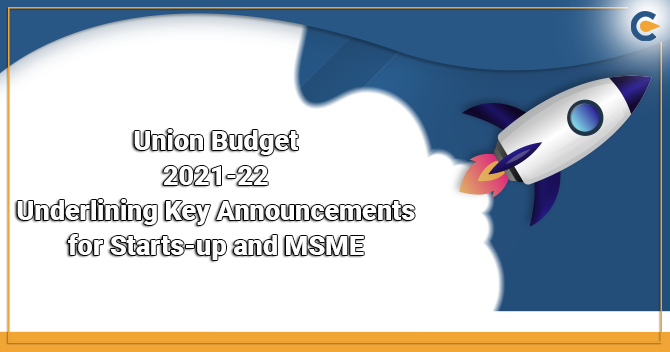 Union Budget 2021-22 was introduced in the higher house of parliament in the month of Feb. It was the first time wh... 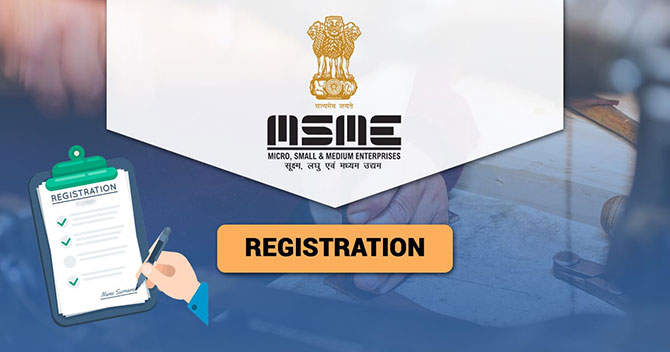 How to Register under Micro Small and Medium Enterprises in India?

Registration under the Micro Small and Medium Enterprises opens a new horizon of opportunities for registered entit...