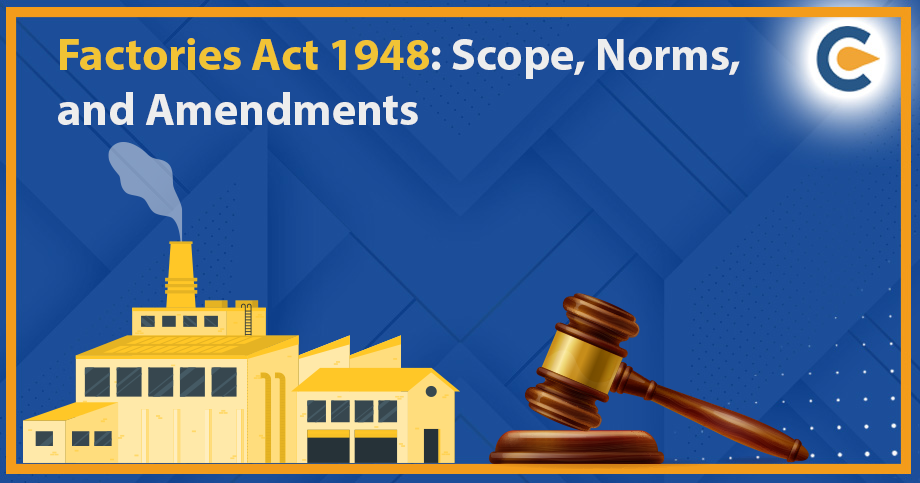 The fundamental objective of the Factories Act 1948 is to ensure the betterment of the workers by regularizing various aspects, including working conditions, shift timing, holidays, etc. It also curbs misconducts like abusive labour, child employment, excessive work, and so on. This article casts light on different facets of this legislation alongside penalties and changes being made over time. Scroll down to check more about Factories Act 1948

Following is the scope of the Factories Act 1948:

Norms for Workers’ Well-being and Betterment under Factories Act 1948

Following are the key provisions of the Factories Act 1948 that endorse worker welfare within the workplace:

48 hours/per week is the permissible shift time for adults working in the factories. Workers are qualified to avail of weekly off on Sunday.

Factory owners should consider workers’ well-being as of paramount importance. They are liable to ensure the utmost cleanliness at the workplace. The workplace should have a capable drainage system, proper lighting, and ventilation.

Workers’ safety is another prime concern requiring undue attention from the factory owners. The person in charge should cover the machinery (accidental-prone) with apt fencing. Also, they must prevent inexperienced or underage individuals from operating such machines. Factories must equip with ample manholes so that workers can escape in case of emergency.

The Act mandates the establishment of a separate washing area for the workers on board and it must stay operational during the working hours.

Under no circumstances factories’ owners can breach the norms of the Factories Act 1948 or else penalties would come into effect.

Obligations of Occupier as per the Factories Act 1948

The following are the legal responsibilities vested in the occupier as per the provisions of the Factories Act 1948:

1.   Intimation to the concerned official

The occupier must intimate the concerned officer via writ notice about

Every occupier is liable to mitigate imminent dangers (posing a risk to workers) as soon as possible via prompt remedial measures. After extinguishing the risk, the occupier must intimate the inspection about the action being taken for risk mitigation.

4.   Setting up restrooms and canteens for workers (Sections 42 to 49)

Every occupier must ensure that their production unit comprises amenities like a canteen, lunch room, creche, washing units, and so on for all workers and a welfare officer.

The occupier of the factory, in agreement with the committee, underpinned u/s 3 of the Industrial Disputes Act, 1947 (14 of 1947) or any other legislation or in agreement with the workers’ representative, if any,  may release a scheme, enclosing the Chief inspector’s approval, reflecting the grant of leave permitted under this section may be regulated.

6.   Conducting a survey about safety and occupational health (Section 91-A)

The occupier of the factory or person in charge must perform a survey concerning safety and occupational health. The survey may include risk-prone premises within the facilities or sample/data collection from different departments.

Duties assigned to Operation Manager under the Factories Act 1948

Following are the roles and responsibilities assigned to the manager under Factories Act 1948:

The manager or person in charge should extinguish imminent dangers within the workplace via quick remedial measures. The intimation for the same must be shared with the concerned inspection via a detailed report.

2. Displaying the notice regarding work for adults (Section 61)

Section 61 talks about the intimation of information to be provided by the manager regarding the working period of the adult via a display medium. Apart from that, such notice shall reflect the following information explicitly:

The factory manager should mandatorily upkeep a register relating to the adult workers. Such a document shall remain accessible to the inspecting official during working hours.

The manager of the factory, in agreement with the committee, underpinned u/s 3 of the Industrial Disputes Act, 1947 (14 of 1947) or any other legislation or in agreement with the workers’ representative, if any,  may release a scheme, enclosing the Chief inspector’s approval, reflecting the grant of leave permitted under this section may be regulated.

Whenever any worker gets infected by a notified disease, the manager of the factory must share this subject matter with the concerned authority via a prescribed form within a deadline as mentioned under the legislation.

The manager of the factory (serving as a person in charge) must conduct a survey relating to safety and occupational health. Such a survey may include data/sample gathering to drive meaningful insights.

Penalties for non-compliance under the Factories Act 1948

Given are the penalties to be imposed on defaulters for the following non-compliances:

Section 92 talks about non-compliance with the underlying norms and their consequences. The said section holds a manager or person in charge accountable for any non-conformity. Any non-compliance could incur the following penalties for the occupier or manager;

If any person breaches any norms and continues to adhere to non-compliance, such an individual may face a jail term of up to 3 years and a monetary penalty amounting to Rs 10,000, which can go up to Rs 2 lakhs. In some cases, both penalties can come into effect.

To determine this section’s applicability, the manager should only consider the offences within the preceding two years of the newly-committed offence.

Section 95: Penalty for obstructing an inspector

If anyone attempts to hinder the rights of inspection accorded by the Act or fails to cooperate, as and when required, such an individual shall face jail terms of up to 6 months or a fine amounting to Rs 10000 or both. The same penalties would apply in cases where workers are being deterred by the manager from appearing before an inspector.

Section 96 underpins the penalty of Rs 10000 and imprisonment of six months for defaulters who are found guilty of disclosing analysis reports (enclosing the testing outcome of selected samples) to non-authorized persons.

Section 97 casts a fine of Rs 500 for workers being flagged as defaulters for creating nuisances for co-workers and breaching certain laws.

A fitness Certificate refers to a legal document that affirms the level of fitness of a worker for a particular job. If anyone found guilty of falsifying such documents shall incur the following penalties:

Section 99 ensures legal fencing for an offence like the dual employment of a child. It prohibits such acts and hence imposes a penalty of Rs 1000 for the caretaker of the child in question. The same penalty shall come into effect for those leveraging child’s wages for benefits.

The Factories (Amendment) Bill, 2016, came into effect on August 10, 2016. The Minister for Labour and Employment, Mr. Bandaru Dattatreya introduced the said legislation to the higher house of the parliament. The Bill brought many amendments, as shown below:

Section 64: Extension of Overtime hours of work in a quarter

The Act empowers the state government to devise rules concerning regulations of overtime of work. But, the total hours must not surpass 50 hours for a quarter. The bill extended this timeline to 100 hours.

The Act empowers the state government to accord permits to adult workers to work extended hours if case the factory witnesses an increased workload. The total no.of extended work hours should not surpass 75 in a given quarter.

The Factories Act 1948[1] pens down detailed guidelines and provisions that support the idea of workers’ betterment and welfare. The Act also curbs conduct that leads to the exploitation of workers irrespective of age and gender. It is labour-supportive legislation that has a greater significance given the massive populace of the underprivileged working class in India.

Read Our Article:Registration and Licensing of Factories under Factories Act, 1948 Documents Required for Factory License in India – An Overview

According to the Factory, 1948, it is compulsory for every factory owner to get Factory License for their premises... Factory Act 1948 came into effect in the year 1940. Since then, it has been serving as the sole regulatory framewor...