A Guide on Exemptions for Private Limited Companies 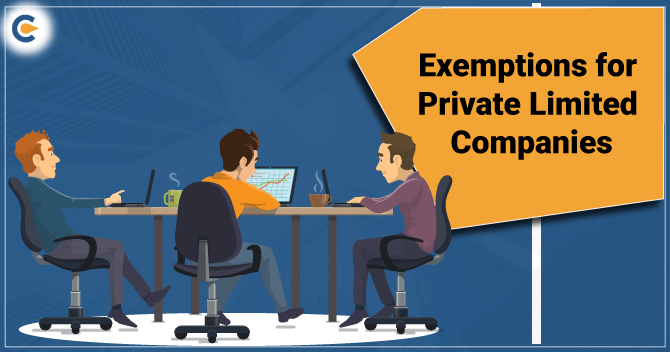 The Companies Act states that if you intend to establish a private limited company, you do not need availing the commencement certificate of the business. The Act further states that there is no need to arrange any board meeting or file a statutory file with the registrar of companies. Since private limited companies have fewer resources, they do not need to procure paid-up capital to establish the business.

Overview on Advent of the Companies Act of 2013

The article would explain the list of exemption offered by the modified act to the private limited companies. The exemptions which you would find in this article are based on the ground of a notification issued on 5/6/2015.  The MCA (Ministry of Corporate Affairs[1]) has also made some significant changes in the incorporation rules 2014, which eventually come into effect on 1/1/2017. So without any further ado, let’s get on with the Exemptions for Private Limited Companies.

Previously the privately-owned company was set up based on minimum paid-up capital i.e. 1, 00,000 Rs. But such a requirement has now been withdrawn after the arrival of the aforesaid amendment in Companies Act, 2013. The amendment has slashed down this threshold limit to zero. The notification was issued under the central ministry’s guidance, and it demonstrates the revision of the given provisions.

Read our article:Steps for Private Limited Company Incorporation In India

Thus, any agreement between exempted entities and a private company won’t lure the permission of BOD or shareholders. In short, the private company would no longer have to ensure conformity with the provisions of Section 188 of CA 2013 for such transactions.

Such Exemptions for Private Limited Companies would let the entities avert any transaction routed into by a private company with its associate companies related to party transactions. The consent for related parties voting provides relaxation to the privately owned firms having disinterested members.

The Companies Act of 2013 permits the companies to accept the deposit from its member but under prescribed conditions of Section 73.The aforesaid amendment has relived such a burden from the private limited company. It means that the entities would no longer have to comply with the provision of Section 73 of the Act. Furthermore, these entities are required to file details of such deposit with the Registrar of the companies.

Additionally, the amendment also withdraws the provisions that avert the acceptance of deposit from the director’s relative. As of now, the private limited companies are eligible to accept deposits from such a person only if the fund is not raised via a credit scheme from the financial institutions.

Section 43 of the Companies Act, 2013, facilitates the provision that permits the companies to use only two classes of shares i.e. equity shares and preference share capital. Equity shares irrespective of differential rights to dividend, voting was permitted which is subjected to conditions. Section 47 allowed the equity shareholder to cast a vote on all resolutions. Meanwhile, preference shareholders are permitted to cast a vote only on a resolution associated with their rights or the fate of the company.

Such Exemptions for Private Limited Companies advocates the non-applicability of the above clauses if the MOA and AOA of the private limited company enclose the same prerequisite. Thus the privately-owned firm can possess any class of share capital as per their articles.

The exemption would allow the private limited companies to render special classes of share to the investors and also help them to raise the capital. Some experts even claimed that such exemptions for the private limited companies would also ease out the share’s structuring process. Furthermore, it also aids in framing the returns to foreign investors.

Section 180 (1) of the Company Act, 2013 states that the BOD of the company is required to raise the approval of the shareholders via special resolutions at the general meeting for particular transactions such as lease, sale, compensation arise due to merger or the amalgamation in securities. The BOD must also seek shareholder’s approval in the case procurement of funds exceeding the company’s paid-up share capital.

But, after the arrival of the notification mentioned above, the private limited companies have been isolated for such requirement, which means that they are no longer have to abide by the provision of the Section above of the Act.

Hiring of the Senior Management

Section 196(4) of the Company Act, 2013, hiring of senior management cannot be done without the shareholder’s consent. The appointment should be in accordance with terms and conditions cited under Schedule V of the 2013 Act.

If the company fails to obliged by the aforesaid act then in such a case, the company was supposed to avail the government’s approval for such an appointment. As per Section 196(5) of the Act

As per Section 117 (3)(g) of the Companies Act, 2013, the privately-owned firm is required to file Board resolution’s copy sanctioned for a specific matter with respect to section 179(3) of the Act with the ROC (Registrar of Companies). After the advent of the notification, such constraints have been withdrawn from the said Act.

That means the privately-owned companies are no longer liable to file such resolution with ROC. As a result of that, the resolution associated with security buyback authorization, making calls on the share (unpaid), approval of financial statement, granting of loans, merger or acquisition, or any other matters concerning Rule 8  doesn’t need to file with ROC. The privately-owned firms are now not liable to file MGT-14 with ROC on several provisions  U/s 179(3) and rule 8 of the Companies Rules, 2014.

Section 114 (3)(g) of the Companies auditors’ appointment in a private limited company states that an auditor serving full-time employment elsewhere or a person of a company holding appointment is not eligible to be employed as an auditor if he/she holds 20 appointment offers at the date of appointment. Such limitation was applied to the partner, partnership-oriented companies, and auditing firms.  These constraints have been withdrawn of the Company Act after implementing the new provisions that were rolled out via notification released in 2015. Now the companies are under no legal obligation to serve such an act.

Companies having paid-up capital of less than INR 100 Crore are eligible to appoint its auditor regardless of the limit described above under Section 141(3)(g). Moreover, this would also permit the companies to retain their auditors as long as possible.

The exemption in such an area has been made on the following grounds.

Section 160 of the act states that the person who intends to hold a position of director is required to serve two weeks’ notice and deposit Rs 1 lakh. However, the retiring directors need not fulfill such a requirement. The Act is modified by revamping this requirement, and a person can stand in for directorship without addressing the conditions described above. However, the right of the retiring directors in this context remains unchanged.

Section 162 of the Act illustrates that the appointment of the two or more directors must be done through independent voting. The act also emphasizes that such an appointment should not be addressed via a single resolution. Such limitation under Section 162 has been withdrawn from the said act, and now the companies are required to comply with less compliance with respect to the directors’ appointment.

Disclosure of the concern by director

Section 184(2) of the Act states that the company’s director liable to share their nature of interest with whom a contract is entered regardless of their nature of association with that company. Such directors are not permitted to attend board meetings discussing such arrangements or contracts. The provision seemed to be stringent in nature, especially for the companies having more than one director.

Such limitation has been laid down for such directors who are associated with body corporate in one way or another and hold more than 2% shareholding of the same. The exemption rolled out via notification fix this issue by permitting the interested director to attain the board meeting after disclosing the interest.

The notification for exemptions permitted private companies for granting such a loan which is subject to conditions applicable for purpose of exemption offered to the private limited companies from the provisions of Section 73 and is as follows:-

The private limited company is still regarded as the most profitable business model both in terms of reliability and compliance. The contribution of private limited companies in the country’s development is unparalleled, and that’s why the majority of the startups are more inclined toward this business model. The aforesaid exemptions for Private Limited Companies are likely to attract more startups in years to come and probably boost the rate of the development. The previous act has many limitations for private limited companies, and but with the release of the notification on 5/6/2015, everything seems to come on track.