Process of Environmental Clearance in India

The section below illustrates the process of Environmental Clearance in India

The project proponent pinpoints the plant’s location after adhering to existing underlying guidelines. If the project site fails to ensure conformity with the siting guideline, the proponent must lookout for an alternative site for the project.

The project proponent then evaluates whether the proposed project falls under the ambit of environmental Clearance or not. If it falls under the notification schedule, the proponent performs an EIA study either directly or via a third party. If the project falls under category B, it needs to be sanctioned via the state government for Clearance. For this purpose, the state government categorises such projects into B1 and B2 projects. The preparation of the EIA report is not required for the B2 project.

Step 3: Submission of EIA report and Assessment by SPCB

After preparing the EIA report, the investor furnishes the same to the respective State Pollution Control Board and State-based Forest Department (if the location is present nearby/within the forestland). The SPCB examines and assesses the quality and quality of effluent or pollutants likely to generate the project. The authority also evaluates the efficacy of the control measures proposed to fulfil the underlying norms. If the SPCB does not find any loophole in this context, it shall grant its approval in the form of a No-objection certificate.

The public hearing is a vital step in securing environmental Clearance. This facilitates a legal space for habitant of an area to put up their concern before the government regarding the credibility or viability of the project.

The public hearing process is performed before the issuance of the NOC described above. The District Collector is the person who chaired such a committee. Other key members of the committee include the official from the SPCB, district development body, Department of Environment and Forest, Gram Panchayat representative and senior citizen of the district, etc. The hearing committee evaluates the suggestions/objections submitted by the general public. After adding certain clauses, it is passed on to the subsequent stage of approval (Ministry of Forest and Environment).

The project proponent furnishes the duly filed application for environmental Clearance with the Ministry of Forest and Environment if it falls under the category of Project A or the state government if it comes under project B category. The application form is accompanied by standard documents such as the EIA report, EMP, NOC, and public hearing details.

The documents furnished are first examined by a multi-disciplinary the Ministry of Environment and Forests staff. The said staff may also conduct on-site inspections, contact investors, and consult with experts on some issues if required.

After this, the proposals are forwarded to specially constituted committees of professionals whose composition is mentioned in the EIA Notification.

Such committees are called Environmental Appraisal Committees, which has been set up for each sector such as Industries, River Valley, and Mining etc. And these committees meet consistently to evaluate the proposals received in the Ministry. In the case of certain projects, which have attracted significant public attention, the committee may also arrange for public hearings to public intervention in developmental decisions.

Proclamations for these public hearings shall be made thirty days before via newspapers. Based on the exercise cited above, the Appraisal Committees put forward their recommendations for approval or rejection of particular projects.

The Committees’ recommendations are then undergone evaluation conducted by the Ministry of Environment and Forests.

When a project seeks mandatory environmental Clearance and consent under Forest (Conservation) Act, 1980[1], the proposals for either of them are required to be facilitated simultaneously to the respective divisions of the Ministry.

Though individual letters may be issued, the processing is undertaken concurrently for clearance/rejection. If the project does not have any requirement for forest land diversion, the case is processed for environmental Clearance only.

Once all the mandatory documentation and data from the concerned authorities are received, and public hearings have been successfully held, assessment and evaluation about the project from the environment viewpoint are completed within 90 days. The Ministry’s decision shall be conveyed within thirty days after that.

The Clearance issued shall remain valid for five years from the commencement of the project’s operation.

Industrial projects from the given notified ecological fragile/sensitive areas shall require Environmental Clearance regardless of the type of project.

Environmental Clearance seeks to curb industries and projects that supposedly hamper the environment and living species in one way or another.  It serves as a legal consent for industries that are unfriendly to environment. It has been made mandatory under Environment Protection Act, 1986. 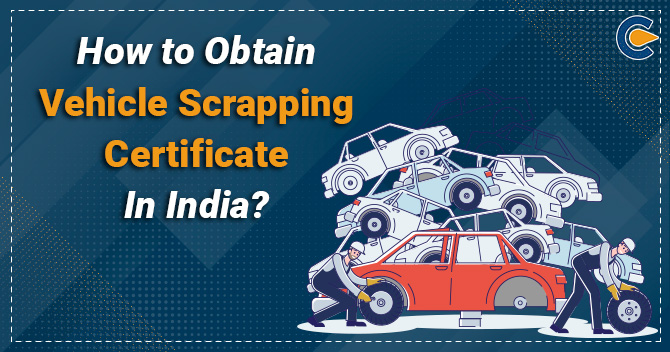 How to Obtain Vehicle Scrapping Certificate in India?

The Government has released new rules regarding the usage of vehicles or cars in India for 15 years. As per the gui... In the Union Budget 2021, the Finance Minister Smt. Nirmala Sitharaman has introduced a vehicle scrap policy. This...