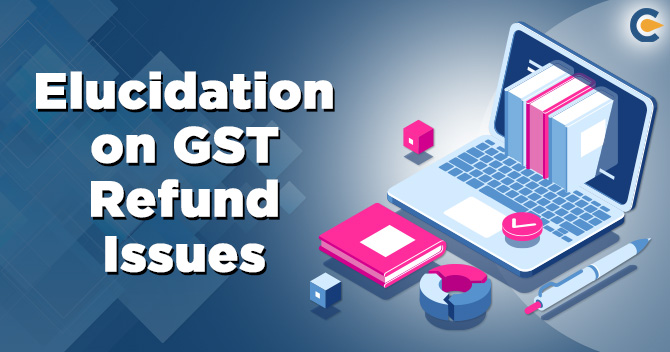 In order to provide clarification on GST refund issues, the Central Board of Indirect Taxes and Customs went on issuing a CGST Circular No. 135 on the 31st of March, 2020. Before that, there were a lot of perplexities in regard to claiming refunds under GST. By issuing a circular, the CBIC has made efforts to bring coherence in the GST provisions implementation part.

Because of the inverted tax structure, a claim for refund of accumulated ITC can be made only if input and output supplies belong to two different classes. Under this section, ITC cannot be availed if the input and output supplies both carry the same rate and ITC accumulated due to a change in the rate of tax. Earlier, claiming for this refund was a possibility, but with the presentation of this circular, claiming for refunds due to an inverted tax structure is not possible at all.

In Form GST RFD – 01, the chief circular on the GST refund has enveloped all refund applications. Let’s look at the classification other than zero-rated supplies-

Even the claims are not related to Zero-rated supplies. Still, the refund gets settled up in cash in the current scenario.

According to the recent notification released by CBIC on the 23rd of March, 2020, the refund of excess tax paid on supplies leaving the Zero-rated supplies will be available in the similar proportion in which cash and credit ledger got debited for tax payment and for which claiming of refund can be made later on. In Form GST RFD-06, an order will be issued for payment in the form of cash. Also, the GST officer will issue a Form GST PMT-03 for re-crediting the Input Tax Credit amount in the credit ledger.

Central Board of Indirect Taxes and Customs issued a Circular on the 31st of March 2020 to provide elucidation on GST Refund issues related to its online processing and promises to bring consistency in the implementation of GST provisions. We hope you might have gained a lot of insight regarding clarification on GST refund issues after giving a thorough reading to this article.

Read our article:Latest Changes In GST Due To COVID 19

In India, income tax is levied on the basis of an individual's income, and the tax rates based on the range of inco...

GST on Legal Services in India...

Before addressing the applicability of GST on legal services in India, let's begin with the basic understanding of...