Dishonour of Cheque: What does it Mean? 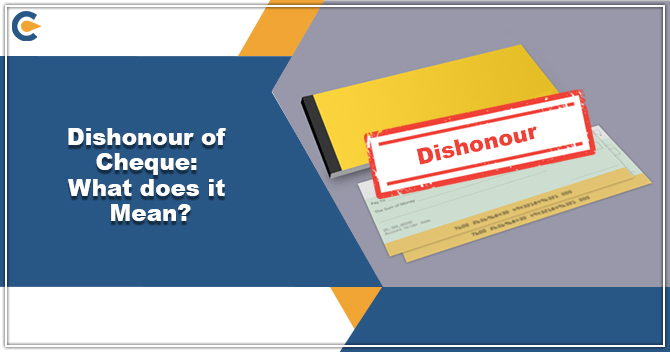 Have you encountered a scenario related to the dishonour of cheques in the recent past? This primarily occurs because most people do not have much of an understanding of creating and operating bank accounts. Therefore, they end up making weird mistakes while drafting a cheque in the name of the beneficiary. Thus, it is vital to comprehend the fundamental banking norms & protecting your funds against illicit activities & mitigating chances of cheque rejection. This blog takes a snapshot of the critical reasons that trigger the situation like the Dishonour of Cheque.

What do you mean by Dishonour of Cheque?

In the banking landscape, the honoured cheque indicates the successful transaction of amount cited on the cheque to the concerned beneficiary, aka payee.

Furthermore, the payee must facilitate notice to the drawer within one month from the date of receiving the “Cheque Return Memo”. The notice must clearly state that the cheque sum will be paid to the beneficiary within fifteen days from the receipt date of the notice by the drawer.

But, if the drawer somehow fails to dispense the new payment within the prescribed timeline, the beneficiary can leverage a court proceeding against the defaulter in the purview of Section 138 of the Negotiable Instruments Act.

Read our article:How to Send a Legal Notice for Cheque Bounce

Reasons that triggers the Dishonour of Cheque

When any cheque encounters the scenario of dishonouring, a ‘cheque return memo’ is facilitated by the Bank to the beneficiary, manifesting the reason that triggers such an event. The beneficiary has an option to resubmit the cheque if they strongly believe that it shall be honoured next time. The beneficiary can sue the payer if the cheque is dishonoured again.

The Negotiable Instrument Act, 1881[1] talks about the scenario related to the dishonour of cheques. In the purview of section 138 of the said act, dishonour of cheque is an illicit activity that is subjected to penal provisions that include monetary as well as jail terms up to 2 years

If a cheque is dishonoured, then the involved parties will be subjected to prescribed penal provisions. In such an event, the Bank will act as an authority that executes the penal proceeding.

The person will also have to address a late payment fine if the dishonoured cheque is against the loan’s repayment.

The accruing failed transaction via cheque badly impacts the credit history of the drawer that eventually leads to a compromised credit score. With that outcome, almost all banks will become reluctant to dispense any credit help to the payer. Therefore, it is of paramount importance to ensure that the cheque doesn’t encounter any legal trouble at any processing stage.

Common Faqs pertaining to the dishonour of Cheques

What happens if a cheque is Dishonoured?

Section 138 of the Act tagged such activities as a legal offence subjected to a penal provision that entails monetary charges and jail terms or both.

What is the time limit to file a cheque bounce case?

In the purview of the Negotiable Instruments Act, the defaulter must be notified within 30 days from the date on which the cheque is bounced. The payee can file the case in the respective jurisdiction within 45 days from the date of notifying the defaulter via legal notice. If the said action is conducted beyond the aforesaid time limit, then the same shall be time-barred

How many times cheque can bounce?

If the cheque gets dishonoured at least once, then you can notify the defaulter. You are not supposed to dishonour the cheque numerous times. For filing case u/s138 of the Negotiable Instruments Act, your only alternative is filing a grievance in court.

Can a Dishonoured cheque be presented again?

Yes, it is legally permissible to resubmit the cheque to the Bank for payment, even if it was bounced for the first time. But, it goes without saying that the cheque can be resubmitted only during the validity duration. Typically, the validity period of the cheque last for three months.

What happens if a cheque bounces three times?

If the cheque has been dishonoured by the Bank within three months, then the payee can use the drawer within the 30 days from the date of the last memo by asking for money within 15 days; if payment is not dispensed within 15 days, then you can lodge a grievance within 30 days.

Dishonour of cheque is a term commonly used in the banking domain. The term comes to light when a bank refuses to cash the cheque because some discrepancy occurred from the payer’s side.

Read our article:What Payee Should Do under the Circumstances of Cheque Dishonour or Cheque Bounce?

What Payee Should Do under the...

A cheque is a way to transfer the money and promotes the transactions of the economy in cashless. With time the usa...