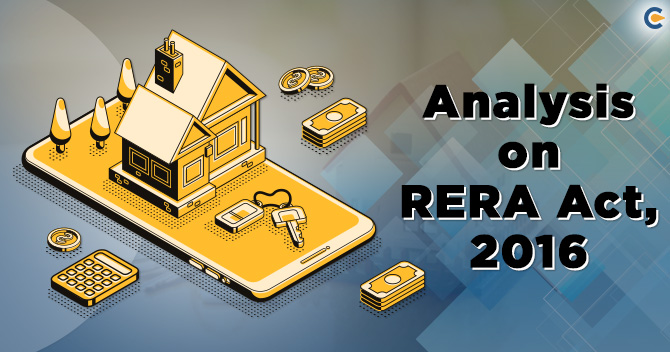 The Real Estate (Regulation & Development) Act, 2016, came into effect from May 1, 2017. RERA has effective measures for all residential and commercial projects in all states of India. After RERA Act analysis the Parliament passed an Act that seeks to protect the interests of homebuyers and simultaneously boost investments in the real estate industry. The Act establishes a Real Estate Regulatory Authority (RERA) in each state to regulate the real estate sector and acts as an adjudicating body for speedy dispute redressal.

With the changing legal scenario post the introduction and implementation of RERA Registration, home buyers and developers alike can look forward to a healthy and conducive legal environment for settlement of disputes and redressal grievances, including compensation for any omission, negligence, delays, etc. With a number of good judgments/orders coming from various state RERA authorities, one can surely rest assured that RERA Act analysis is indeed the right step in the right direction. However, there are still certain grey areas that need to be addressed by RERA in the long run.

Key Provisions under RERA in favour of Home Buyers

Read our article:Guide on RERA Registration for Real Estate Agents

Section 11 of the Act

Section 12 of the Act

If a buyer invests into a particular project due to information contained in a prospectus/ advertisement or after seeing a model flat/apartment and if such information turns out to be incorrect or false, then any loss incurred by the buyer shall have to be compensated by the promoter.

The Right of Information

The allottee must be entitled to obtain the information relating to sanctioned plans, layout plans along with the specifications, approved by the competent authority, and such other information as provided in this Act or the rules and regulations made thereunder or the agreement for sale signed with the promoter.

The Right to Know Stage Wise Progress of Project

The allottee must be entitled to know the stagewise schedule of completion of the project, including the provisions for water, sanitation, and electricity and other amenities and services as agreed to between the promoter and the allottee, in accordance with the terms and conditions of the agreement for sale. The registration must be valid for the period indicated in a project application as required for the completion of a project. Once the period is over, the Regulatory Authority has a right to revoke the registration granted for the project.

Right of the buyer to withdraw from the project

If a builder or developer has not handed over the property by the date mentioned in an agreement for sale or if the Regulatory Authority’s registration has been suspended or revoked, the buyer has the right to withdraw from the project.

If a builder or developer is not voluntarily compensating the buyer, he/she can file a complaint. Each State Regulatory Authority is supposed to appoint an officer who performs the functions of a judge. The officer will conduct an inquiry and pass an order once the officer has decided whether the buyer is supposed to get the interest or money spent.

Right of the buyer to Appeal

In case the buyers dissatisfied with the order of Regulatory Authority, they can file an appeal with the Appellate Tribunal, who will redress your case within 60 days. In case of failure, it must record the reasons regarding such failure.

Rights of a buyer in Case of Defect in Title

If it is found that there is a defect in the title of the property at any time after the possession of a property, then the consumer can claim compensation from the builder. It is also not barred by the Limitation Act, which means there is no time limit within which one can discover the defect.

Right of the Buyer in Case of Defect after Possession

If any structural defect or any defect in workmanship, quality, provision, or service is discovered within five years after the possession of the apartment, the builder will rectify such defect at no extra cost within 30 days.

Delay in the Registration of ‘Ongoing’ Projects with the RERA

Inadequate Time for Completion of the Conveyance of a Project

Section 17 of the RERA Act states that a promoter must complete the conveyance of aproject favoring the allottees within 3 months of receiving the occupancy certificate. This period is deemed to be short for promoters. They claim that while it is presumed that promoters seek to avoid conveyance in order to retain the stake in the project. The conveyance-avoiding behavior of the allottees has not been adequately accounted for by the Act. The allottee seeks to avoid the conveyance of a project so that the promoter continues to be responsible for carrying out maintenance and repair works foras long as possible. In reality, it becomes difficult for promoters to realistically meet a 3 month deadline set under the Act.

The Act erroneously placed ‘structural defects’ and ‘bad workmanship’ in the same basket when it comes to allowing the buyer to trigger the compensation clause within 5 years. Section 14(3)[1] of the RERA Act lays down that a promoter must rectify any structural defect or any other defect in workmanship, quality, or provision of services within 30 days of the buyer bringing it to their notice.

The Act provides the buyer with a 5 year window within which such defects can be brought up. ‘Structural defects’ refer to defects in the entire structure, i.e., the building. On the other hand, ‘workmanship’ refers to defects within the unit, which the allotted must identify within a year of taking possession of the unit. The Act gives the allotted so much time to bring them to the promoter’s notice, places a disproportionately heavy burden on the promoter.

Defects if a promoter fails to complete a project

This provision could create problems in the future, especially during lean periods for the real estate market, when the market value of the project gets depreciates. In such an event, the allottees would be likely availed the option of getting their money back with interest, as opposed to pushing for the completion of the project.

One of the biggest problems that remain even after the implementation of RERA is obtaining various approvals from various Government agencies by the builder. In the absence of a single-window for disbursing all regulatory approvals, the launching of the projects tends to get delayed in the developers’ hands as known after RERA Act analysis. The same has been a longstanding demand of the real estate sector as it will help in the timely completion of the projects.

Read our article:All You Need To Know About RERA Registration Process

Central Board of Direct Taxation in the exercise of the powers conferred under section 10 clause (46)  of the Inco...

Everything You Need to Know Re...

RERA or Real Estate Regulatory Authority was established under the Real Estate (Regulation and Development) Act was...