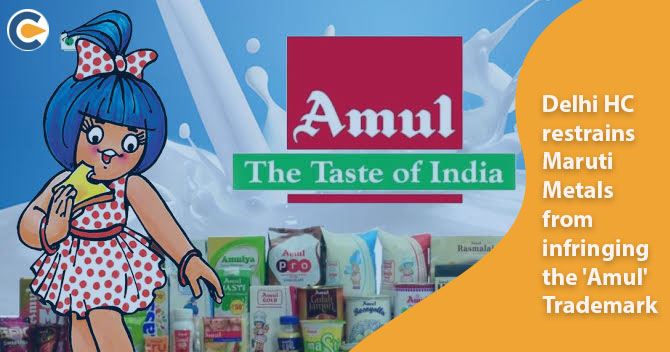 India has many industries that operate under the free-market concept, and the competition in the market system is extreme. For getting an entry into the open market, they have to create brand recognition and value. The simplest way through which the Brand value can get maintained is by registered trademarks. The Brand value enhances by a registered trademark, and it is essential to protect the name from infringement and unauthorized use by others. In this write-up, we will discuss how the Court has restrained Maruti Metals from Infringing Amul Trademark?

Background of the Case-

In the relevant case, Maruti Metals was using the trademark ‘Amul’ on its kitchenware products. The Trademark used by the defendant company was falsely similar to the Trademark “Amul” belonging to the Gujarat Cooperative Milk Marketing Federation Ltd. The use of a similar trademark can confuse the market. However, the unauthorized mark used by the defendant company was not registered but was illegally showing as a registered mark.

The case was such that the grant of ad-interim relief exists and also amounts to fraud on the public.

The matter came before Justice C. Hari Shankar who, later issued a warrant to the defendant company. The Milk marketing federation filed the given suit. However, the Plaintiff company alleged that the defendant company intentionally used its Trademark ‘Amul’ in the field of Kitchenware and utensils with the only aim to increase their goodwill.

Facts of the Case

The Court said the word ‘Amul’ is unique and has no grammatical meaning and is known by the public as the products of the plaintiff company. Using the word ‘Amul’ as a trademark by any other entity may amount to infringement. The Lawyer representing the plaintiff company contended that the defendant(Maruti Metals) had illegally picturized its Trademark (Amul Cookware) as a registered trademark in the market.

The Court said the statements supported by the record as it exists before it make out an evidential case in favor of the plaintiff company, as the challenged mark (Amul Cookware) is not registered and illegally presented as a registered mark. Further, the Court ordered the defendant company to file the written statement along with proof of admission and disapproval of documents within four weeks in response.

Provisionally, the Plaintiff sought direction to restrain the defendant, its officers, and others from advertising, to promote, or in any other manner using or dealing with the infringing mark ‘Amul’ or any other word, which are similar or illusively similar to the ‘Amul’ Trademark of the Plaintiff company.

What decision was taken by the Court?

In the given case, The Delhi High Court has restrained Maruti Metals from using the word ‘Amul Cookware’ on its kitchenware products as it is deceptively similar to the Trademark of the Gujarat Cooperative Milk Marketing Federation Ltd. Also, a mark used by Maruti Metals is not registered and is illegally showing as a registered mark.

Here, the Court has granted an ex-parte ad-interim injunction to the Plaintiff Company (Gujarat Cooperative Milk Marketing Federation Ltd), popularly known as ‘Amul[1],’ in a trademark infringement case. The case alleged that the defendant company (Maruti metals) was selling its Kitchenware and utensils with an unauthorized and misleading mark, i.e., ‘Amul Cookware.’ As a result, the Court prima facie decided in favor of the Amul.

The Court further states that the case is a clear grant of ad-interim relief, and such representation also leads to a fraud on the public. However, the Court had directed the defendant company while passing an ad-interim order to file their written statement in response to the suit. Also, the written statement shall be filed along with an affidavit of admission and denial of documents that were filed by Plaintiff.

Conclusively, in the hot legal battle over infringement of Trademark, the Plaintiff sought a route to restrain Maruti Metals and its officer from dealing or selling with the Infringing mark (Amul Cookware) that is similar just like the Plaintiff’s registered Trademark “Amul.” Practically, Infringement disputes are usually resolved through negotiation by the parties, notice, and settling down process or litigation in the Court. Here the Court has decided the case in favor of Plaintiff as the registered holder of the well-known trademark ‘Amul’ known for milk and milk products.

Can we register a trademark or...

The brand name can be prevented from unauthorized people or infringement when we register a trademark. The laws and...