COVID-19: MCA Relieved Date of Holding AGM for the Companies 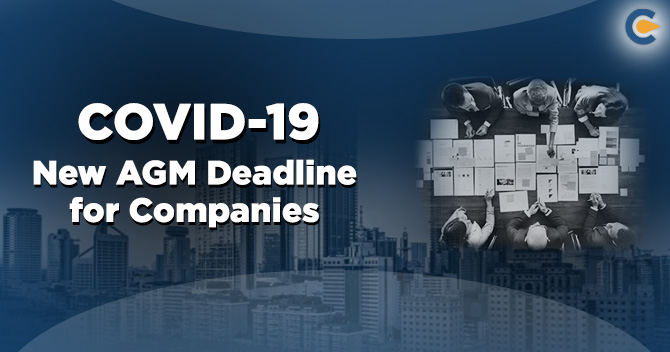 Recently on 21st April, 2020 Ministry of Corporate Affairs (MCA) issued the circular for companies under which authority provided the ease of holding AGM (Annual General Meeting) due to the outbreak of COVID-19.

As per Section 96 of the Companies Act, 2013[1], an Annual General Meeting is hold by the Company every year in a following below mentioned intervals:

This meeting is hold by giving 21 days advance notice to all the members and not more than 15 months should be elapsed between two AGMs.

Why Government has eased the deadlines of holding AGM?

As we all are undergoing social distancing norms and substantial limitations due to outbreak of COVID-19, it has become difficult for companies to hold Annual General Meeting whose financial year closed on December 31, 2019. Consequently regarding the same, Indian government received a number of representations from stakeholders. As a result of which government authority issued circular for providing ease of holding AGM.

What step has been taken by the government regarding this?

With a view to provide ease to companies, government issued a circular addressing all the ROCs (Registrars of Companies), RDs (Regional Directors) as well as  Stakeholders stating that,

“Companies whose financial year (other than first financial year) has ended on 31st December 2019, can hold their AGM within a period of nine months from the closure of the financial year (i.e. by 30th September, 2020), and this shall not be viewed as a violation. The references to the due date of AGM or the date by which the AGM should have been held under the Act or the rules made thereunder into construed accordingly.”

Applicability of the Relaxed Deadline

Considering amid COVID-19 pandemic and countrywide lockdown, the ministry has relaxed deadline for holding AGM for companies whose financial year ended on 31st December 2019.

Read our article:MCA issues clarification on the spending of CSR funds for COVID-19

Penalty provisions regarding the default made in holding AGM are defined under Section 99 of the Companies Act, 2013, as per which every office officer in default shall be punishable with fine which may extend to Rs. 1,00,000/- while in case of continuing default it will go up to Rs. 5,000/- per day.

As per Section 96(1) of the Companies, Act, 2013, the Registrar of Companies (ROC) may extend the time limit of holding AGM up to maximum period of three months; however extension doesn’t apply on first AGM. In order to apply for extension, an application needs to be submitted in e-form GNL-1.

Keeping in mind the difficulty faced by stakeholders due to COVID-19 social distancing norms and consequential restrictions MCA issued circular on 21st April 2020 to notify that companies whose financial year (other than first financial year) ended on 31st December, 2019, can convene their AGM within nine months from the closure of the financial year (i.e. by 30th September, 2020), and it shall not be viewed as a violation.

Soniya is dedicated professional having flair for reading & writing to keep herself updated with the latest economical developments. In a short span of 4 years as a professional she has worked on projects related to IPR & Corporate laws which have given her diversity in work and a chance to blend her subject knowledge with its real time implementation, thus enhancing her skills.

The Reserve Bank of India (RBI) has directed Banks to link floating rate loans to the Medium Enterprises with Exter...