What are the Useful Tips to Check Authenticity of NGOs working in India? 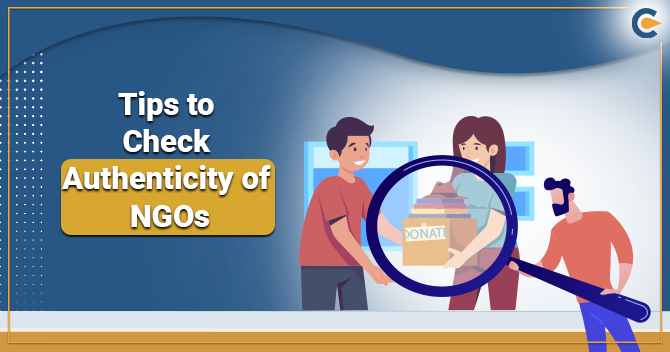 Are you a concerned citizen of India who perpetually donates funds to different NGOs? If so, they were probably keen to know that how these institutions are using your money.

Checking the authenticity of NGOs is probably the first thing that comes into mind of an individual while donating for a fair cause. In this blog, we will look forward to explaining some legitimate ways that enable you to determine NGOs’ authenticity with ease.

What is NGO and it’s Objectives?

The term “NGOs” stands for Non-Government Organizations, which is a type of entity formed by a group of enthusiastic individuals working towards a common cause. Their primary objective is to work for the upliftment of the individual and society.

NGO battles consistently works to highlight the major issues and collect funds as a part of the initiative to mitigate the same. As the name suggests, these firms do not work for self-profitability and are free of the national and state government’s association.

A non-governmental organization is categorized based on operation, scalability to fill specific political or social needs. As an autonomous and non-profit entity, NGOs depend on various sources for fueling their operations, venture, and overhead expenses. Since the annual expenditure of an NGO can be millions of rupees, collecting fund endeavors are important for the NGO’s existence and achievement.

What is the Need for Checking Authenticity of NGOs Rising Rapidly?

Despite the clear cut objective of NGOs, people have become more concerned about how these institutions operate or how they allocate their hard earned money. Collectively, the past experiences of people with NGOs are not good as many of these institutions allegedly found involving in various fraudulent activities in the past.

NGOs are generally exempted from paying Taxes to some extent, once they are registered under the existing Act. In some case, there are few entities continually hoping to deceive the individuals for their funds by giving them faulty impression. Owing to these acts, people are losing confidence and have become reluctant to provide any monetary help to NGOs. The authenticity of NGOs has now become a serious concern for an individual when it comes to donating funds.

How to Check the Authenticity of NGOs Working in India?

Following are the ways that will help you determine the authenticity of NGOs working in India.

Non-Government Organization that are considerably financed directly or indirectly” by government funding, generally falls within the regime of “public authority” under the Right to Information (RTI) Act, 2005. The said Act was enacted for bringing probity in public life & transparency in public dealing.

This particular aspect directs NGOs to maintain records as per the provisions cited under the Act, and every person reserves the right to get information from them. Now by visiting the RTI portal, the concerned individual can conduct basic investigation on NGOs.

The Council for Advancement of People’s Action and Rural Technology (CAPART) perpetually rolled out the list of non-legitimate NGOs on their official portal. You can also visit an NGO Charities Aid Foundation (CAF[1]) India, which stamps the authority on such institutions.

Look out for Government-Based Registrations

You may examine the NGO registration, Tax certificate, and Objective they were currently serving. Better visit the organization to get a better picture of their operations.

An annual report can act as legit proof of an organization’s authenticity. So whenever you are in doubt, ask the NGOs to provide the annual report to examine their financial standing & their current scenario.

Remember, if an NGO refuses to serve your request, then its okay to presume that they are grappling with their existence and may not be the right candidate for your money. An annual report allows the individual to comprehend the working and spending patterns of the organization, giving a fair idea of their performance in the past.

Stay connected with Reports and Updates Rolled out Periodically

Legitimate NGOs maintain transparency in their operation through reports or updates on causes they work. This encourages trust and builds a stronger relationship with the donees. All you need to keep yourself in touch with these reports or updates to get a better idea of your funds allocation.

Look out for Payment Criteria for Making Donation

Typically, a legit NGO does not opt for cash-based transactions. Instead, it prefers donation via online payment or cheque. The most secure way to pay directly to NGO either by payment gateway or cheque. Do not interact with direct selling agents (DSA) who received commission over the collection. It has been seen that these individuals work on high commissions, somewhere around 40-50%. This really sounds inconvenient, especially when you are contributing to a noble cause.

If you are unsure which NGO is legit for donation, you can reach our associations like Give India, ICICI Communities, Hind Rise, or CRY, who are actively engaged with the various types of social works and will utilize your prudently and effectively.

Various NGOs depend on the government for the procurement of funds, despite their autonomous working nature. Some registered NGO financing might look doubtful owing to the fact the subsidizing might boost some political matters rather than country’s advancement objectives.

Do not forget to share your thought or queries regarding the authenticity of NGOs through the comment section; we will be obliged to support you.

Read our article: Development of Non-Forest Wastelands during NGO Registration

Foreign Contribution Act, 2010 is a consolidating act whose scope is to regulate ‘’the acceptance and usage of...

Section 12A (1) a/aa/ab provides new registration of trust where a trust or an institution has granted registration...