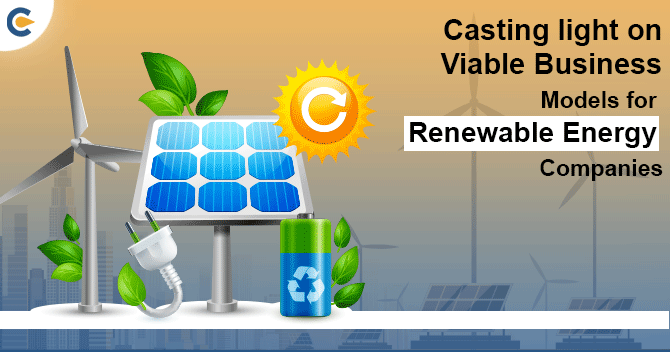 Despite India’s monumental success in the recent past, Renewable energy companies are facing trouble in attaining economy of scale. This led to the growth of the following issues, which curtail these industries to ensure seamless growth.

Curtailing these downsides is a monumental task for these entities as it seeks huge cost, time, and sizable management. Fortunately, these companies have the opportunity to undermine these issues to some extent with the adoption of viable business options. This write-up aims to brief these models in detail. But first, let understand what a business model is and what purpose it serves in general.

Understanding the Significance of Business model for an Organization

The term business model refers to a plan of an organization for profit-making. It specifies the business’s offerings, it’s identified key market, and any expected expenses. Business models are imperative for both new and old businesses. They aid companies to attract funding from potential investors, recruit a suitable workforce, and encourage management. Well established companies must update their business plans periodically, or else they will fail to project trends and obstacles ahead. Business plans aid investors to evaluate organizations that interest them.

What is the fundamental business model of a renewable energy project or plant? The prominent elements of business models for electricity generators from renewable sources are cost structure, revenue streams, and the way it is financed.

A revenue model serves as a framework for generating finances. It specifies which revenue source to opt for, what value to facilitate, how to price the value, & who pays out for the value. It is considered a primary component of an organization’s business model. It essentially determines what offerings will be created to generate revenue and the manners in which such offering will be sold.

The most prominent revenue stream for renewable energy companies comes from selling electricity, either at a fixed price or a market price. If the installation lacks a grid connection, the saving from not having to buy out electricity from other sources increases new income in the same manner.

Depending on the nation, the project may also generate & sell carbon emission reduction certificates or renewable energy certificates.

Tax benefits serve as a second income revenue stream. They can take the form of

Production Tax Credits: the cost for producing every kWh over a fixed timeline.

Investment Tax Credits: The likelihood to offset the initial investment over (partly or wholly) over the years against pre-tax profits.

The value relating to tax credits is based on the investor’s tax capacity. Typically, homeowners will not be able to reap benefits from such a stream. Consequently, the revenue stream is not stable over the years, particularly if the initial year witnesses high-interest payments.

A company is an intricate system for rendering value. An operating model breaks such a system into crucial components, manifesting how it works. It can aid officials to determine shortfalls that are compromising the performance. It can also aid those transforming an operation linked all the different changes that need to come to life.

An operating model is more dynamic than a conventional business blueprint, with changes happening regularly. The utilization of this business model is not limited to a specific business element. It can aid companies to strengthen other key elements such as processes, software applications, and decision making.

It can also communicate the vision relating to the future operation. In this regard, it is often regarded as the target operating model, which acts as a view of operating at the future point in time.

In general, this model is a practical set of an ever-changing set of documentation, like an organization chart.

In a nutshell, this model describes how a company delivers value; as such, it acts as a subset of the larger notion of business model. An operating model aims to focus on the delivery facet of the business model.

When it comes to the renewable energy business, there are some operational expenses, as fees for maintenance tend to be low. However, some technologies might seek considerable maintenance halfway through the plant’s service life. For example- inverters installed in the solar plants might need to be replaced before the modules.

Tax only requires to be addressed after the investment has been depreciated completely.

All other flows are dependent on the way the project has been funded.

Renewable energy companies seek up-front funding, which might be spread over the construction timeline. Once functioning, no further injections are needed unless a major incidence occurs, which can be prevented if cash is kept in a dedicated account funded from current cash flows.

The following are some widely known investment models.

This investment can be either domestic or overseas in nature; The FDI can improve the prevailing infrastructures and create jobs in the process. This model is aggressively used in the business fraternity for external investment.

The present-day economy, characterized by turbulent changes, compels companies to deploy new management ideas and concepts. During their selection, the paradigms of creating competitive advantage play a pivotal role. Due to the business environment’s instability and unpredictability, internal changes within organizations are imperative for commercial success and survival.

The most imperative business changes to be considered by officials today include the different playing fields & alternation in the key resources moving away from financial resources and raw material to focus on human capital and intellectual property. An effective business model is a notion that may ensure the seamless building of a company’s competitive advantage during testing times.

Read our article:How to Prepare a Business Plan? – A Complete Guide for startups

International business is a facet of the modern economy by which the technical advancement also made it possible fo...

If you landed on this article, you surely have your innate desire to become an entrepreneur[1] rising to a level th...