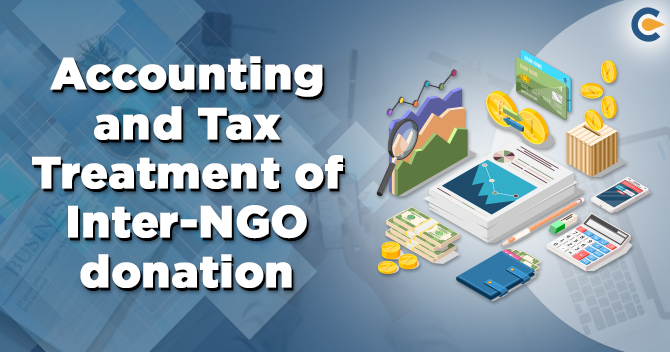 Tax accounting is an arrangement that focuses on tax appearances on financial statements. It is governed by the Internal Income Codifications of any NGO which commands the specific rules that the NGO must follow at times of formulating their tax returns.

What does Corpus Fund signifies in terms of Inter-NGO Donations?

Corpus Fund is a type of fund which is kept for the necessary expenditures desired for the management and existence of the NGO. Therefore, the corpus fund is generally not permitted to get utilized for the accomplishment of the purposes.

However, the interest/ dividend accrued for such funds can be employed for the accumulation of overall revenue. NGOs can use other donations as corpus donation, only if there is no prior specific instruction received from the donors to employ it as corpus donation.

Additionally, it has also been held in numerous cases that donation made by one Charitable Organisation to another shall be measured as ‘application of income’ if the object of the organization have objects parallel to the purpose of donor establishment.

Non-conformity of exemption on Corpus by Inter-NGO donations

What are the Donations to other Charitable Institutions?

The three types of Donations to other Charitable Institutions are as follows:-

Donations Derived out of Current Income

Donations Derived out of Accumulated Income

What does Authorities say on the Utilisation of Income Receipt?

What is the Journey behind Inter-NGO Finances Donations 2002-03?

Donations from a Charitable Institutions to Another

In the beginning, it has held in numerous cases that donation made by one Charitable Organisation to another shall be measured as application of income for the organization on condition that the receiving organization also has object similar to the object of donor organization.

Donations from a Charitable Institution to another Later 1/4/2002

Any Donations derived out of Current income is Qualified for Application

Central Board of Direct Taxes on Inter-NGO Donations

If the Inter-NGO donations get its valid application of income, there is no cause under Explanation 2 to section 11(1) could not be applied as well as the income gets genuinely-placed/expended/distributed in the successive year. Nonetheless, all the reasons have to be genuine. With this, the organization must make sure that they carry valid reasons for not being able to apply the income as Inter-NGO donations.

Read our article:Application & Accumulation of Income by Trust: Case Laws

What are the Major Case laws Enshrined upon the Inter-NGO/Charity Donations?

The Indian government is becoming more conscious of assembling the correct tax from roots so that our economy gets more durable. It aims to fulfill this goal as per the new amendments proposed until this date. Having said this, if any capital gets utilized for donating to another charitable trust following the objects of the trust deed, then yes, it should be understood as the application towards income.

These are just an evaluation, and we always inspire our readers to examine the issue in-depth based on the mentioned case laws and amended rules/decided judicial decisions accordingly. With this, the group of Corpbiz has experienced professionals to help you with the process of Inter-Charity Donations and tax exemptions parameters. Our expert will ensure the successful and favorable completion of your work.

Shedding Light on Subjects and...

NGO registration authorises you to be evident in front of legal fraternity enabling you to have the obligation to...

Before starting an NGO and going for NGO registration, you need to know how NGO works. NGOs endeavours to work on v...