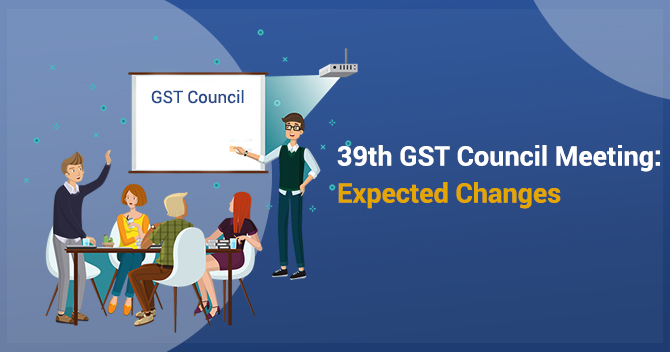 The 39th GST Council meeting is to be held on this coming Saturday, i.e. March 14, 2020, at Vigyan Bhawan New Delhi. The Union Finance Minister Nirmala Sitharaman will chair the meeting. The Council in its 38th meeting is expected to deliberate on crucial issues under Goods and services tax including rationalization of tax rates[1] on various sectors, deferment of implementation of the new return filing system and e-invoicing etc.

Issues to be Discussed in 39th GST Council Meeting

The inverted tax structure is a situation where tax rates are higher on inputs than on the finished product.

GST Council in its 39th meeting is expected to correct the inverted duty structure and increase GST rates on mobile phones, footwear, fertilizer and textiles. Besides, GST Council will also deliberate upon the operational glitches on GST Network portal. All these expected moves of increasing GST rates would augment revenue collection. Moreover, the GST Council is also expected to discuss the measures to avoid tax evasion.

An Overview on Filing of Form...

Form 10BA is a statement as recorded by the taxpayer who needs to maintain tax deduction under Section 80GG[1] for...

The lower house of the parliament i.e. Lok Sabha has passed the Taxation and Other Laws (Relaxation and Amendment o...