What is Legal Metrology? Complete Concept and Laws 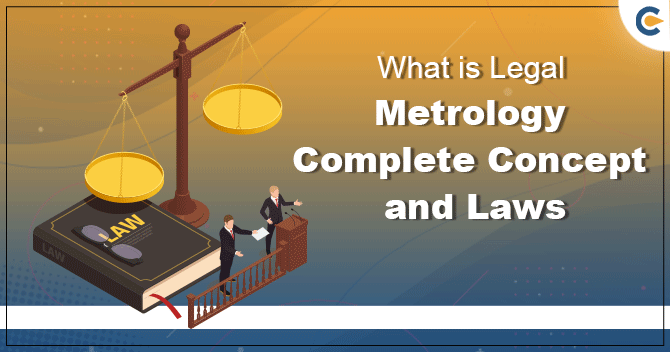 In any case, progression in science and innovation of technology achieved improvement in the extent of weights and measures. Consequently, to normalise weights and measures for commercial purposes and for trading business and stay aware of the advances in science and innovation, there was the enactment of the Legal Metrology Act, 2009, which repealed the Standards of Weight and Measurement Act, 1976 and the Standards of Weights and Measures (Enforcement) Act, 1985.

Likewise, Legal Metrology (Packaged Commodities) Rules, 2011 (“PC Rules”) was enacted, stating the fundamentals and mandates of the standards maintaining with required declarations on packaged goods, registrations of producers, traders, and packaging of goods, provisions for the wholesale and retail businesses, Power of Government to investigate the premises, punishments, etc. which get revised and amended every once in a while, to guarantee that the law stays up with changes in innovation.

The Legal Metrology Act, 2009, also known as the LM Act, was enacted to regulate the uniformity of weights and measures along with trade and commerce related to weights, measures and goods that are to be sold and distributed via weighing, measurement and numbers. Any producer or trader who is in the business that needs to weigh and measure their product before selling mandatorily needs to obtain approval from the authorities before the commencement of any manufacturing of products or selling of products or distribution of products.

What is The Legal Metrology (Packaged Commodities) Rules, 2011?

The Legal Metrology (Packaged Commodities) Rules, 2011, also known as the PC Rules, was enacted to maintain the regulation of Packaging and Labelling of goods and other commodities. Chapter II of the Rules, establishes provisions which is applicable for packages which the intention to be utilised in the business of retail, also termed as “Retail Sale”. Retail Sale defines the selling, distributing and delivering of goods and commodities via Retail Sale Shops, Agencies, etc., for the purpose of being consumed by any consumer.

What is the Indian Institute of Legal Metrology?

Under Section 21, for Knowledge related to LM Laws or any similar field, The Indian Institute of Legal Metrology, also known as IILM, has been established. This Institute is established by the Government of India in accordance with the Standards of Weights and Measures Act, 1976. This institute is dedicated towards training for jobs in the field of Legal Metrology, which also imparts towards foreign officials of around 32 various countries.

What are the Constitutional Provisions for Legal Metrology?

Under the Constitution of India, Entry 33A of the Concurrent List is stated for ensuring of enforcement of Legal Metrology in India. Entry 50 of the Union List is stated for farming of Acts, Rules, Standard Specifications, and maintenance of International Relations, etc. which are related to LM Laws.

What are the Basic Requirements Regulated under Legal Metrology Act, 2009?

The Act clearly states that all units of weights and measurement needs to be set according to the established metric system as per the International System of Units.

What does the Legal Metrology Act, 2009 specify for Standard Units?

What is specified for Weights and Measurements?

The LM Laws was established to provide guidelines for having control over weights and measurements and its instruments. LM is also applicable for the purpose of granting protection to the consumers and for providing basic safety for the public, the ecology, the traders or anyone related to this field. This subject of law is very strict regarding the fair trade of all businesses in India.

Read our Article:Model Approval for Indian Weights and Measures Instruments

The Packing and Labeling of Cosmetic products in the Indian Cosmetic Industry is governed by several Laws and rules...

Model Approval for Imported We...

Any person who is seeking to import any weight and measures shall obtain the model approval for imported weights an...