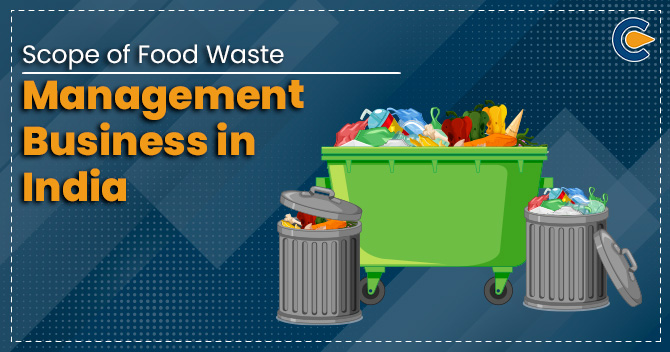 As per the present reports, it is estimated that 1.3 billion tonnes of food per year are wasted or discarded, causing 750 million Dollars’ worth of economic and environmental loss. This wastage has also been linked to the increasing food shortages in developing or underdeveloped countries. When thrown away in the landfills, this waste food causes the release of many toxic gasses that are classified as greenhouse gases, leading to global warming and Air Pollution.

Nowadays, when every type of waste is encouraged to be recycled and have a proper management system in place, including plastic waste and e-Waste, Food waste management is ignored due to the misconception surrounding the biodegradable properties of food and the fact that it decomposes itself in spite of the fact that, that process takes a lot of time and causes pollution. Therefore, it is very important to set up a proper Food Waste management system in place.

Food wastage is believed to be a global problem. It is estimated by the Food and Agricultural Organization of the United Nations (UNFAO) that one-third of the food produced globally each year is either lost or wasted. This food waste is equally contributed by the Developed as well as developing nations, with only developing and underdeveloped nations bearing the cost of wasted food. Apart from this, India has also ranked 2nd just behind China in the Global Food Waste Index 2021, with wasted food calculated at 68.8 million tonnes valued at around 92,000 crores with a growth rate of 8% to 10%.

As per a report in CSR Journal, India is estimated that the amount of food wasted in India is similar to the amount of food consumed in the United Kingdom. It is projected that around 40 per cent of the produced food in India, due to the fragmented food system and insufficient supply chain, is wasted every year despite of the fact that we have millions of people who sleep hungry. As per the global hunger index of 2017, India ranks 100 among 119 countries, indicating the presence of restrictive growth in children below five years, the number of undernourished individuals and the mortality rate of children under five years.

While affecting increasing World hunger, Food Wastage also has an adverse effect on the environment, which escapes from the knowledge of many people. Food, as we know, is a commodity which is produced in a limited amount which, when wasted, results in more scarcity of the natural resources resulting in additional pressure to increase the production, which in return cause degradation of soil. Apart from this, other natural resources are also wasted, which are used during the production of food, food processing, transporting and storing of food.

Also, once the food is discarded and thrown in the landfills or in a dump, it produces methane, a powerful greenhouse gas that, combined with Carbon dioxide and Chlorofluorocarbons[1], causes the earth’s surface to heat up, resulting in global warming. It is estimated that agriculture accounts for more than 20 per cent of overall greenhouse gas emissions in 2010.

Wasted food is the wet waste, which includes food, whether cooked or uncooked, fruit and vegetable waste etc.; this wasted food is majorly sent for fertilizers production while the other is either thrown in the landfills or buried, causing land pollution. In India, there are many ways of food Waste management, including Composting, Turning food waste into animal feed, producing different products like biofuel and fertilizers and managing at source or donation of food.

In India, Food waste management is regulated under Solid Waste Management Rules, 2016, which stipulates the channelizing the waste by recovery, reuse and recycling as well as segregation of food at the source. This act also notifies that all hotels and restaurants are responsible for segregating biodegradable waste and setting up a collection system for composting/bio-metalation within the sites.

Food Waste management is also an emerging innovating industry that has a lot of potential to gain revenue. In 2022, the food waste management industry is expected to be worth $62.6 billion. According to Future Market Insights (FMI), the total market value is estimated to reach US$ 116.4 bill by 2032, with a CAGR of 6.4 per cent for the years 2021-32.

The guiding principles which govern Food Waste Management are: –

The process to register for Food Waste Management in India.

Documents required with the application for Food Waste Management Business

The authorization will be valid at first for two years and then for five years each time it is renewed. Before 60 days have passed since the expiration date, an application for renewal can be submitted in Form 4, and the state PCB or the pollution control committee can renew after reviewing each case.

Food shortages across the world have resulted in the death of approximately 3.1 million children of age less than five. This food shortage can be blamed majorly on the wastage of food and poor food waste management. In India, where food wastage is one of the biggest problems, there is a lot of scope for a food waste management business which has already proven very successful in the US market.

As per the norm of PWM rules, PIBOs (Producers, Importers, and Brand owners) are obligated to adopt Extended Produc...

An Overview of the E-Waste Rec...

E-waste is the most prominent waste source in the whole world, and it also poses a major environmental threat. The...