RBI Extends Deadline for One – Time Restructuring of MSME Loans 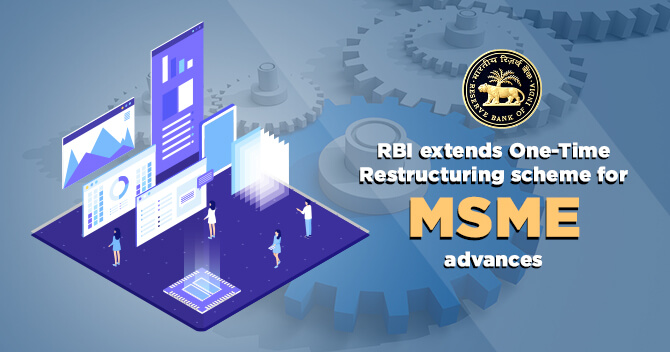 RBI has decided to extend the deadline for one-time restructuring scheme of MSME loans by another nine months to December 31.

This decision came after the FM said in her budget speech that the government had asked RBI to extend the restructuring window.

The Reserve Bank of India (RBI)[1] in its Monetary Policy Review Meeting decided to extend the deadline of one-time restructuring scheme of MSME loans by another nine months to December 31, 2020. Earlier the restructuring window was to end on March 31, 2020. This decision of extending the deadline came after the Finance Minister of India in her second Union Budget speech announced that the government had asked the Reserve Bank of India (RBI) to extend the restructuring window till March 31, 2021.

The FM in her budget speech said that, more than five lakh MSMEs have benefited from the restructuring of debt permitted by RBI in the last year.

Focusing on MSME sector RBI stated that these enterprises have significant importance in the growth of the Indian economy. MSMEs contribute around 24.63% of the GDP from service activities and at the same time creates employment for about 11 crore people.

Taking into consideration the importance of MSMEs in the Indian economy and to create an enabling environment for the sector, RBI permitted a one-time restructuring of loans to MSMEs that were in default but ‘standard’ as on January 1, 2019, without an asset classification downgrade.

Read our article:MSME Form 1: Know The Procedure to File, Due Dates and Penalties

One -Time Restructuring Scheme for MSME Loans: A Prudent Step

RBI further added that the scheme has provided relief to a large number of MSMEs. Since the process of formalization of the MSME sector has a positive impact on the financial stability and the process is still underway, it has been decided to extend the benefit of one-time restructuring scheme of MSME loans up to December 31, 2020.

As per RBI’s notification, the aggregate exposure, including non-fund based facilities, of banks and NBFCs to the borrower should not exceed Rs 25 crore as on January 1, 2020. This restructuring, RBI said, will be applicable if the borrower’s account was in default but was a ‘standard asset’ as on January 1 and continues to be classified as ‘standard asset’ till the date of implementation of the restructuring. However, loans that have already been restructured as per last year’s provision will not be eligible for restructuring under the current circular.

This one-time restructuring scheme of MSME Loans will benefit the eligible MSME entities which could not be recast under the provisions of the circular dated January 1, 2019. RBI reemphasized that this is a one-time regulatory dispensation and the borrowing entity should be GST-registered on the date of implementation of the recast. However, this condition will not apply to MSMEs that are exempted from GST registration.

MSME Form 1 is a form that needs to to be filed by “Specified Companies” who take any supplies from the Micro,...

Small scale industries often abbreviated as SSI are those industries in which the manufacturing, production and ren...