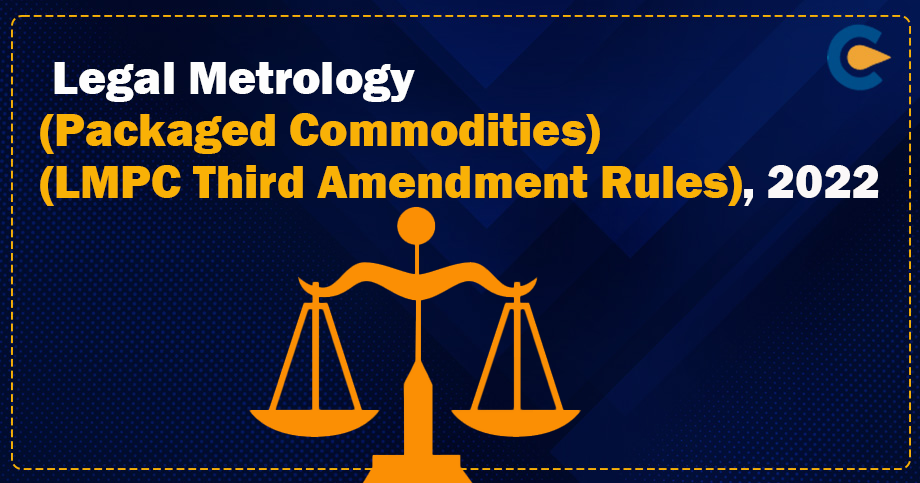 Central Government’s the Ministry of Consumer Affairs, Food and Public Distribution[1] notified on 22nd August 2022 the Legal Metrology (Packaged Commodities) (Third Amendment) Rules 2022 (after this to be referred to as LMPC Third Amendment Rules) by amending the Legal Metrology (Packaged Commodities) Rules, 2011. This Amendment shall be enforced from 1st January 2023.

Department of Consumer Affairs of the Ministry of Consumer Affairs, Food and Public Distribution under the Central Government of India has notified this new Amendment in the exercise of the powers conferred by Section 52 (1) read with (2) clauses (j) and (q) of the Legal Metrology Act, 2009. This notification is regarding the LMPC Third Amendment Rules, which has added a new clause in Rule 26 of the existing Rules of 2011.

Rule 26 under Chapter V of the Legal Metrology (Packaged Commodities) Rules, 2011 has talked about the exemptions in respect of certain packages. It states that nothing contained in such Rules shall apply to any of the packages containing a commodity if:

A new clause (f) after clause (e) in Rule 26 of the existing Legal Metrology (Packaged Commodities) Rules, 2011, has been inserted by LMPC Third Amendment Rules.

This Third Amendment Rules of Legal Metrology (Packaged Commodities) Rules, 2011 states that the garment or hosiery commodities, sold in the loose or open form at the point of sale in such a manner as the customers/consumers can inspect the products before buying them and such products or commodities must have the following details:

However, the exemption under this clause (f) shall apply to the sale of finished products alone, and if such product is sold through e-commerce, then such an e-commerce website shall also display the same information mentioned above. Also, any manufacturer, packer, or importer may, notwithstanding the date of commencement of this LMPC Third Amendment Rules shall declare this information as mentioned above with immediate effect.

E-commerce refers to electronic commerce, which implies buying and selling goods and services and transmitting funds or data over an electronic network, the internet. In simpler words, it is understood as a commercial transaction happening over the internet. The leading examples of E-commerce websites are Amazon, Flipkart, Myntra, eBay, etc.

There are primarily four types of E-commerce, which are:

Conditions to be fulfilled while claiming the exemptions mentioned under the newly inserted clause (f) of Rule 26 are as follows:

The LMPC Third Amendment Rules notified by the Ministry of Consumer Affairs, Food and Public Distribution on 22nd August 2022 focus on the sale of loose or open garments or hosiery. It has inserted clause (f), which mentions certain conditions that need to be fulfilled while taking benefits of exemption given under Rule 26. This Amendment will come into effect from 1st January 2023.

Legal Metrology is among the stringent laws and is often misunderstood by companies, resulting in a hefty penalty....

The Legal Metrology Rules is a term that defines the regulations over the provisions set for the scientific study o...