What is an EPR certificate for the import of E-Waste? 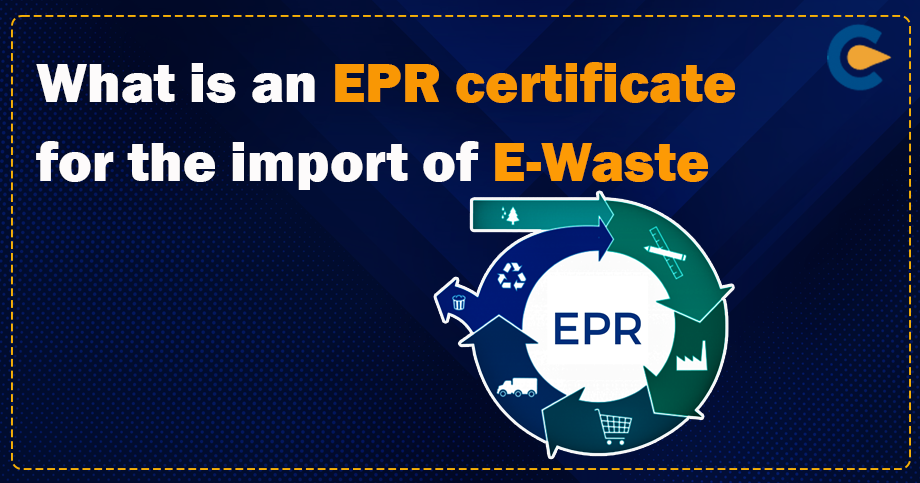 Every year, tonnes and tonnes of e-Waste are illegally imported and dumped in India, making it difficult for authorities to properly manage and regulate the ever-growing collection of WEEE (Waste Electrical or electronic equipment). This has been recently addressed by many national and international authorities as one of the biggest reasons for growing waste in developing nations like India. University Therefore, now, Indian authorities like the Ministry of Environment, Forest and Climate change require proper authorisation for import that to in limited conditions. One of which is acquiring an EPR certificate for the import.

Extended Producers’ Responsibility is defined as the responsibility delegated to producers’/importers or manufacturers relating to proper management of their products till the end-of-life cycle. It is an extension of the “Polluters pay principle” that encourages a “cradle to cradle” approach.

The Extended Producers’ Responsibility was introduced by Sweden’s Thomas Lindqvist, who is in 1990 for one of the Sweden University, which was later introduced to the Swedish Ministry of Environment. This report defining the concept of EPR was introduced at the time when many European countries were implementing policies to improve their waste management system. Ultimately seeing the innovative idea behind EPR, all of the signatories of the Organization for Economic Co-operation and Development (OECD)[1] adopted this policy as an international standard for the prevention of pollution and waste management.

Germany was among the first country to adopt the policy of EPR in Europe in 1991, making manufacturers and producers responsible for waste management of the products they sell, including recycling and disposing of them. In India, Extended Producers’ Responsibility was first introduced in E-Waste Management Rules and Plastic Waste Management Rules through the amendment of 2016. Under these rules, EPR is defined as the responsibility of any producer of plastic or EEE (Electrical or electronic equipment) for the management of those waste in order to make sure that it is disposed of in an environmentally sustainable way.

India is one of the biggest producers’ of E-Waste and has partially banned the import of E-Waste from regulating the influx of WEEE (Waste Electrical or electronic equipment) in India. In a recent report, the Union Government reported Lok sabha of 29 illegal cases of E-Waste import since 2019. Therefore to curb this and make importers and producers responsible for waste, the import of E-Waste in India is only limited to importers who are importing WEEE (Waste Electrical or electronic equipment) to sell to the authorised producer.

E-Waste Management rules, 2016 dictate regulations regarding Import which include:-

EPR certificate for the import of E-Waste

The authorisation for Extended Producers’ Responsibility has been made compulsory for all the producers, including importers.

Except for in the case where the import is happening for selling it to EPR Authorised producers. For which importers only need documents to deposit it to Custom/port authorities the following documents:-

The second exception is when actual users are importing spares of EEE from OEM (Original Equipment Manufacturers) for a reason relating to a warranty replacement, with the condition that an equal number of malfunctioning or default parts are exported back within a year according to the document verification by custom authorities specified under Schedule VIII of Hazardous Waste Rules, 2016.

The documents that are required for acquiring an EPR certificate for the import of E-Waste of E-Waste are: –

Procedure for EPR certificate for the import of E-Waste

Importers under E-Waste management rules are clubbed together with producers’ in case of acquiring an EPR certificate for the import of E-Waste. The application process is similar to that followed by producers’ which includes: –

The self-declaration form that is to be filled by importers as per the E-Waste management Rules contains the basic information of the producers, including: –

Importers, according to the guidelines provided by MoEF and CC (Ministry of Environment, Forest and Climate Change), have to comply with some of the requirements as part of their Extended Producers’ Responsibility. These are: –

Cancellation of EPR Certificate for the Import of E-Waste

The Central Pollution Control Board verifies the documentation submitted by the Importers during the filing of an application. If this documentation is faulty or false, the authorisation can be cancelled. Along with this, if at any point time the importers are discovered to have violated any regulation stipulated under the rules or the guidelines provided by Central Pollution Control Board, the notice is issued by the authorities immediately.

Import of E-Waste has proven to be a delicate subject due to a large amount of illegal importing of E-Waste from developing countries in spite of regulations present in both international as well as domestic legislation. EPR certificate for the import of E-Waste not only levies responsibility on importers relating to the management of their products but also regulates the uncontrolled influx of illegal e-waste in India.

Read our Article:EPR Plan for Plastic Import in India

A plastic credit Model in EPR is envisaged in the case where a producer is not required to recycle their packaging...

How to Acquire Registration un...

EPR or Extended Producers Responsibility is used worldwide as a statutory approach to manage the staggering amount...