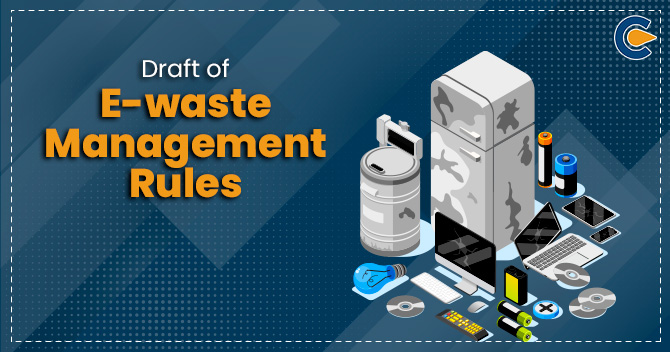 The Draft of E-waste Management Rules is notified on 19th May 2022 to replace the E-Waste (Management) Rules, 2016 and E-Waste (Management) Amendment Rules, 2018. The draft rules are proposed by the Central Government in the exercise of powers given under Sections 6, 8 and 25 of the Environment (Protection) Act, 1986. The draft rules notification is made available to the public for 60 days from the date of its publication in the Official Gazette. Any interested person who wants to make any objection or suggestion has to do so in writing within the specified time period through the post to the Secretary of the Ministry of Environment, Forest and Climate Change.

The total number of chapters in this new Draft is VII with 32 Rules. It has four schedules also, namely I, II, III, and IIIA.

The new Draft of E-waste Management Rules is applicable to manufacturers and producers of EEE (electrical and electronic equipment). It is also applicable to the refurbisher and recycler involved in manufacturing, transferring, selling, purchasing, and processing e-waste or EEE. It also applies to the components, consumables, spares and parts that make the electronic product operational.

The Draft is not applicable to the followings:

Definition clause under the new Draft

EPR Framework under the Draft of E-waste Management Rules

A new chapter with the name EPR Framework is added in the new Draft. This was not there in the existing E-waste Management Rules, 2016.

It has mentioned the Entities to be covered under the EPR framework. The followings are such entities:

It has also discussed the CPCB registration by the above-mentioned entities. The registration is made mandatory for the entities to carry out the business. The registered entities are prohibited from dealing with unregistered entities. If the registered entities provide false information at the time of registration or conceal any information, or even in case of any irregularity, the CPCB revokes the registration for a period of three years; however, before such revocation, the CPCB gives such entity an opportunity to be heard. If any entity falls under more than one category, then it has to register in all categories separately. The CPCB charges a fee and annual maintenance charge from such entities on the capacity of the e-waste generated, recycled, or handled by them. Such fees or charges are decided by the CPCB with the Steering Committee’s approval.

With the approval of the Steering Committee (SC), the CPCB issues necessary guidelines for the registration procedure.

Responsibilities as given under the new Draft

The responsibilities of the following entities are given under this Draft:

Procedure for storage of E-waste and other EPR Regime

Under the new Draft of E-waste Management Rules, Chapter IV deals with the procedure for storage of the e-waste. Every entity stores the e-waste for a specified period of 180 days as per the relevant rules or guidelines. It maintains a record of the sale, transfer and storage of e-waste and also makes such records available for inspection.

The CPCB can extend such a specified period of 180 days to 365 days in the case where e-waste needs to be specifically stored for the development of a process for its recycling or reuse.

Chapter V talks about modalities of the EPR Regime that all producers have to fulfil the EPR obligations as per schedule III, which provides the E-waste recycling target. Schedule III also mentions that the importers of used EEE have a 100 per cent EPR obligation for the imported material after the end of life if not re-exported.

It further states that the EPR obligations for each product are decided based on the information given by the producers and the product’s life period, as suggested by the CPCB. The compliances of EPR are monitored by the Central or State Pollution Control Board.

The Producers have to fulfil the EPR obligations by purchasing an EPR certificate from the registered recyclers and submitting the same by filing the quarterly return. The details given by the producers and registered recyclers are cross-checked, and if there occurs any difference, then the lower figure is considered towards the fulfilment of the Producer’s EPR obligation. The certificates are subject to an environmental audit by the CPCB’s authorized agencies.

The new Draft talks about the EPR Certificate Generation by the CPCB for Recycling and Refurbishing. A producer purchases the EPR Certificate and refurbisher certificate limited to its liability in the current year plus any left-over liability of the preceding year. All such transactions are recorded by the Producers/Recyclers and submitted at the time of filing the quarterly return.

Reduction of Hazardous Substance under the New Draft

In the product user documentation, every producer provides detailed information about the EEE and its components, consumables, spares or parts with the declaration of conformance to the reduction of hazardous substances. This information is self-declaration. The manufacture and supply of EEE used for defence and any other similar strategic applications are also exempted from following the reduction rule. The manufacturers are asked to use such technology or methods to make the end of the product recyclable. The manufacturer ensures that the components or parts made by the different manufacturers are compatible with each other so as to possibly reduce the quantity of the e-waste.

The CPCB conducts a random sampling of EEE to monitor and verify the compliance of the provision related to the reduction of the hazardous substance. If the product fails to comply with the same, then the producer takes the corrective measures and withdraws or recalls the product from the market within the specified time period provided by the CPCB guidelines.

Other Miscellaneous Provisions under the new Draft

No entity is allowed to carry any business without proper registration under the Draft of E-waste Management Rules regulations. The CPCB may provide timely issue guidelines for the collection, transportation, storage, segregation, refurbishment, recycling and disposal of the e-waste under these regulations with the approval of the Central Government. The CPCB have to submit an annual report regarding the implementation of E-waste Management Rules with the quantitative and qualitative analysis with its recommendations to the Ministry of Environment, Forest and Climate Change within one month from the end of the financial year.

The transportation of waste for final treatment, storage or disposal shall follow the Hazardous Waste (Management, Handling and Transboundary Movement) Rules, 2016. The producer, refurbisher, transporter, dismantler or recycler has to inform the concerned SPCB immediately if any accident occurs during the transportation of e-waste.

In case of an order of suspension, cancellation or refusal of registration or renewal by the CPCB, the aggrieved person within the period of 30 days from such order prefers an appeal in the form as prescribed by the Central Government. The Appellate Authority entertains the appeal after the expiry of said 30 days only if it is satisfied that the appellant has sufficient cause of not filing the appeal in time.

Compensation is also imposed on the unregistered manufacturers, refurbishers, recyclers and producers or any other entity that aids or abets in the violation of these regulations.

The funds collected under environmental compensation are utilized for collection and recycling or end-of-life disposal of uncollected, historical, orphaned e-waste and non-recycled or not end-of-life disposal of e-waste on which the compensation is imposed, research and development, and other heads as decided by the committee. These funds are kept in a separate Escrow account by the CPCB. The Steering Committee issues instructions related to the funds with the approval of the MoEF&CC.

A person who gives incorrect information for obtaining the EPR Certificate, uses a false or forged EPR Certificate or fails to cooperate in the verification and audit proceeding is prosecuted under the section 15 of the Environment (Protection) Act, 1986, and such prosecution is in addition to Environment Compensation levied under this Rules.

The CPCB itself or through a designated agency verifies the compliance of the regulations of this Draft by the manufacturer, refurbisher, recycler and producer. Such verification is done by random inspection and periodic audits.

In the end, the Draft has talked about the Steering Committee. The Steering committee is headed by chairman of CPCB. The other members are:

This committee is responsible for the implementation, supervision and monitoring of the guidelines of this Draft. It also decides if the dispute arises and refers to MoEF&CC in case any substantial issue arises. It will also review and revise the guidelines, EPR target and the addition of any new EEE with the approval of the MoEF&CC. It also has the power to remove a difficulty in the implementation of the regulations and refer any issue to the MoEF&CC.

Schedules under the Draft of E-waste Management Rules

There are only three schedules with four headings under this new Draft. Schedule I has mentioned the list of EEE categories, including its components, consumables, parts, and spares covered under this Draft. Schedule II has the list of applications that are exempted from the requirements of sub-rule 1 of Rule 21. Schedule III has provided the E-waste Recycling Targets, and Schedule III (A) has given the EPR targets for producers who have recently started sales operations.

The Central Government proposes the new Draft of E-waste Management Rules under the Environment Protection Act, 1986[1]. It is proposed to replace the E-waste (Management) Rules, 2016 and the E-waste (Management) Amendment Rules, 2018. The Draft is made public by the Central Government for any objection or suggestion. Such objection or suggestion is to be made in writing within the period of 60 days from the date of such publication in the Official Gazette to the Secretary, MoEF&CC. It is very much different from the existing E-waste Management Rules. 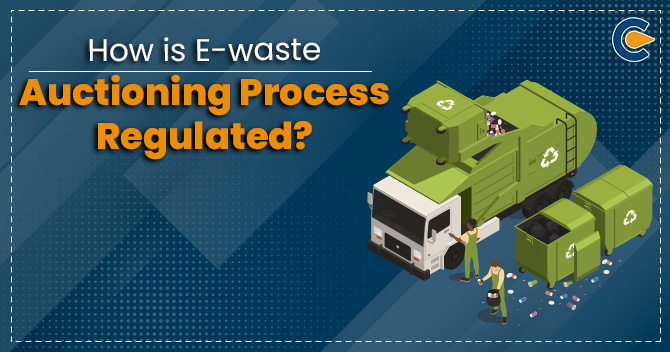 How is E-waste auctioning process regulated?

Mounting Waste and using destructive methods for dealing with pollution are one most prevalent problems currently e... 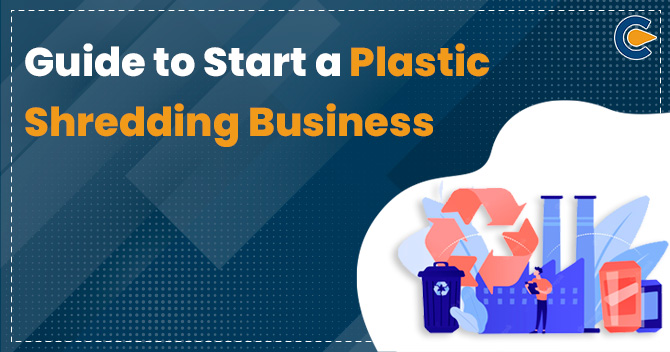 Shredding or grinding plastic waste into tiny flakes is an essential step in recycling. Based on the classification...