GST is an indirect tax imposed in India which came into effect from July 1, 2017. Entity with annual revenue of more than 40 lakh required to file GST.

In GST jurisdiction, any business whose turnover crosses the limit of Rs 40 lakhs (Rs10 lakhs for NE and hill states) should register as separate taxable entity. This process is called GST registration. It takes 2-6 working days to get the GST registration done. Carrying out business without GST registration is considered as an offence under GST.

What is GST (Goods and Service Tax)?

GST is the biggest tax reform in India levied on the goods and services which subsumes both the State (VAT, Entertainment Tax, Luxury Tax, Octroi) and Central taxes (CST, Service Tax, Excise Duty). This will help the end consumer like us to bear only GST charged by the last dealer in the supply chain. After all, One Nation One Tax is the slogan of our PM Sri Narendra Modi.

According to the GST Regime, any business whose turnover is more than INR 40 lakh is required to register as a normal taxable person. However there is an exception for North East and hill states, the turnover is INR 20 Lakh for them.

NOTE: In order to give relaxation to the taxpayers, the CBIC (Central Board Of Indirect Taxes And Customs) on 1 April, 2017 introduced two threshold limits for exemption from registration. If the aggregate turnover of a Business increases more than INR 40 Lakh, then that business is required to have the GST Registration. Though, there is an exemption for the North Eastern states and other states which include Jammu and Kashmir, Himachal Pradesh and Uttarakhand. The limit for these states is INR 20 Lakh which was INR 10 Lakh earlier.

GST Registration is mandatory for businesses whose turnover fall under the criteria mentioned above. In case such business organization carries on business without registering under GST, it will be considered as a punishable offence and will be liable to pay heavy fine penalties.

How will GST Registration Transform the Present Indirect Structure?

GST is an indirect tax imposed in India which came into effect from July 1, 2017 in order to remove the geographical barriers and create a single market that is open to all to buy, sell, import, and export within our country.

Modes of GST Registration in India 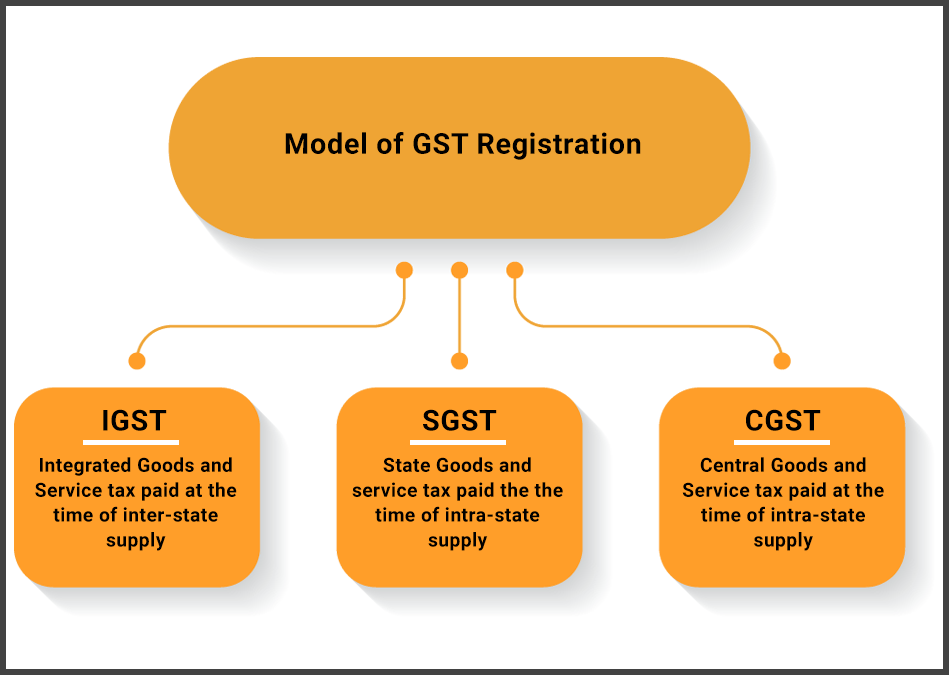 The Documents required for the GST Registration varies with the business type. The list of documents is listed below:

Who is Eligible for GST Registration?

What is The GST Registration Process in India? 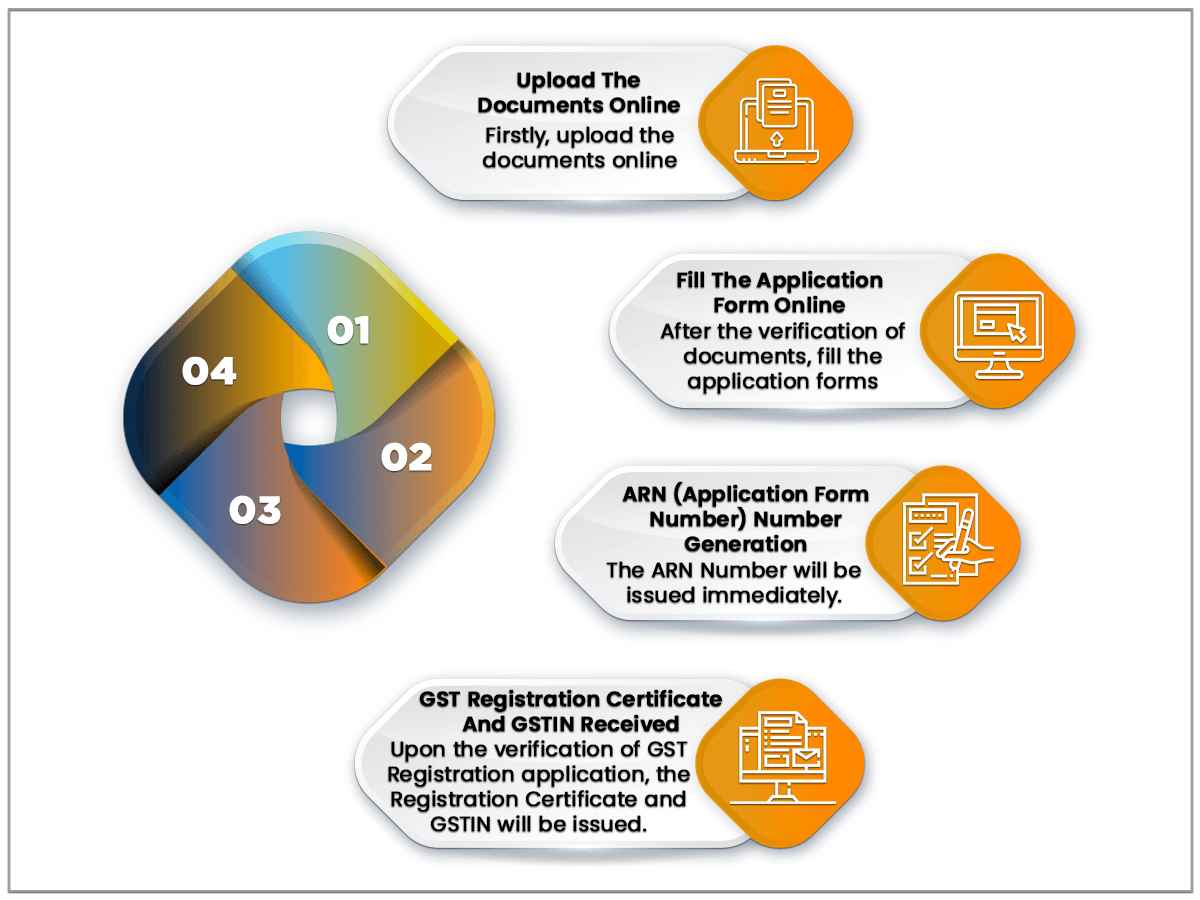 How to Track GST Registration application?

By following method, you can track your GST Registration application

Another Mode to Check Application Status

Penalty if The GST Registration is not Done

Penalty is imposed in case any business entity is not registered.

GSTIN is a 15 digit Goods and Service Tax Identification number that is assigned to the applicant/businesses when they successfully register under GST.

What is the GST threshold limit for all the states?

The CBIC (Central Board of Indirect Taxes and Customs) on 1 April, 2017 introduced two threshold limits for exemption from registration. If the aggregate turnover of a Business increases more than INR 40 Lakh, then that business is required to have the GST Registration. While there is an exemption for the North Eastern states and other states which include Jammu and Kashmir, Himachal Pradesh and Uttarakhand. The limit for these states is INR 20 Lakh which was INR 10 Lakh earlier.

Is there any need for Business to apply for multiple GST Registration?

What is Composition Scheme?

Composition Scheme is not applicable to following:

What are the Business types according to which the Composition Dealers need to pay the taxes?

Composition Dealers need to pay their taxes based on their business types.

What is ARN in GST Registration?

ARN is the Application Reference Number which is generated after successful submission of the application to the GST servers.

Does aggregate turnover include value of inward supplies received on which RCM is payable?

Refer Section 2(6) of CGST Act. Aggregate turnover does not include value of inward supplies on which tax is payable on reverse charge basis.

A taxable person’s business is in many states. All supplies are below 10 Lakhs. He makes an Inter State supply from one state. Is he liable for registration?

He is liable to register if the aggregate turnover (all India) is more than 20 lacs (Rs. 10 lacs in Special Category States) or if he is engaged in inter-State supplies.

Not liable to tax as mentioned u/s 23 of CGST means nil rated supply or abated value of supply?

Not liable to tax means supplies which is not leviable to tax under the CGST/SGST/IGST Act. Please refer to definition under Section 2(78) of the CGST Act.

What if the dealer migrated with wrong PAN as the status of firm was changed from proprietorship to partnership?

New registration would be required as partnership firm would have new PAN.

Whether aggregate turnover includes turnover of supplies on which tax is payable by the recipient under reverse charge?

Outward supplies on which tax is paid on reverse charge basis by the recipient will be included in the aggregate turnover of the supplier.

Whether civil contractor doing projects in various states requires separate registration for all states or a single registration at state of head office will suffice?

A supplier of service will have to register at the location from where he is supplying services.

Is an advocate providing interstate supply chargeable under Reverse Charge liable for registration?

Exemption from registration has been provided to such suppliers who are making only those supplies on which recipient is liable to discharge GST under RCM.

If I register voluntarily though turnover is less than 20 Lakhs, am I required to pay tax from 1st supply I make post registration?

Yes, you would be treated as a normal taxable person.

Is separate registration required for trading and manufacturing by same entity in one state?

There will be only one registration per State for all activities. But, you have the option to be registered as a separate business vertical.

If someone trades only 0% GST items (grains, pulses) then is it necessary to register for GST, if the turnover exceeds ₹20 lacs?

A person dealing with 100% exempted supply is not liable to register irrespective of turnover.

A Brief Coverage on the Difference between VAT and GST...

Synopsis of the Entire Mechanism of Advance Ruling unde...

AAR: Applicability of GST & its Registration for C...

Clarifications made by CBIC regarding GST on Director&#...